A draft of my future Paris book has been sent to Blurb for a first print and I hope to receive within a couple of weeks. Meanwhile I did a quick analysis of the 70+ pictures that are part of it, and more specifically, the lenses that I used to shoot them. The results are roughly as follows :

M9 + 35mm Lux Asph : 33.3% of pictures
M9 + 50mm Cron        : 33.3%
M9 + 60mm Hexanon  : 33.3%
So, what is my take on it ? Well, as I mentioned in this week's poll "What is your favourite focal length for street photography?", I am probably more of a 50-60mm shooter, or to put it in another way, I probably get more keepers with that focal length. This being said, the time of the day, the setting, the weather and my mood also influence which lens I opt to mount during an outing :
– 35mm Lux Asph : Tight streets, crowded areas. Multi-subjects scenes.
– 50mm Cron  : Sunny days. Wide open areas (parks, river front). It also makes a great "take anywhere" combo when not out specifically shooting street due to small size and weight.
– 60mm Hexanon : Cloudy and rainy days. Low light. Wide open areas. Background separation. The Hexanon is my go to lens when in a poetic mood.

This evidently leads me to the recurring debate on "one lens only vs switching lenses". Based on my experience, I'd say that it is good to have several lens options on one's shelf. Not only can it help to break the routine, but it also allows you to match your system to the shooting conditions/mood of a given day. This being said, I am also convinced that once you picked a lens for an outing, you should commit to it for its whole duration. Indeed, there are already so many variables to take into account while out there shooting, that having an internal debate on which lens to use only becomes a distraction away from the action. So all in all, I'd advice to make your lens choice at home, but while in the streets, put all your attention to what is going on in your viewfinder rather than to the lens that is (or isn't) mounted in front of it.

Today's picture (part of the draft) is another version of a shot I had posted a couple of years ago. It features a band of young people celebrating the grape harvest in Montmartre. 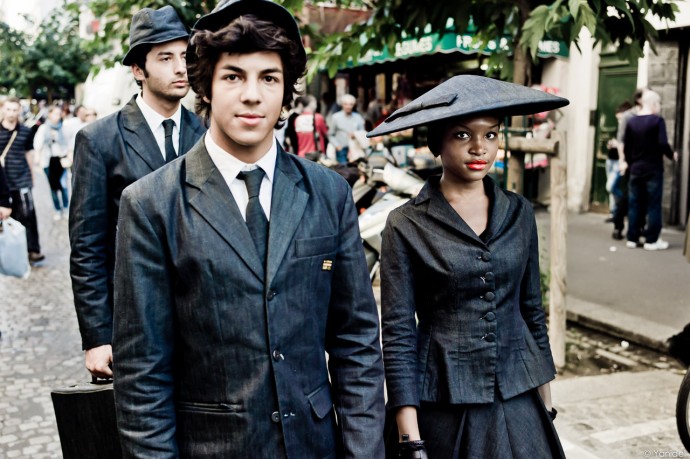