This week, let’s go over two shots from two wonderful cities for street photography, Rome and nearby Buenos Aires. 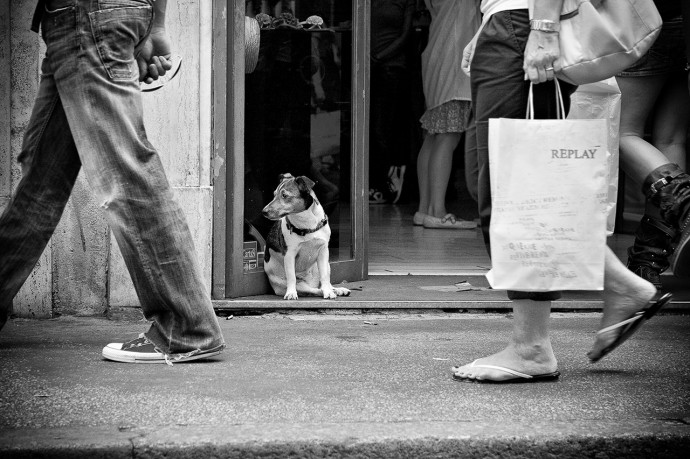 Before I go into the details of the analysis, let me state that dog shots are often tricky. Indeed, a dog will always look good, so in some way that makes this type of pictures quite easy in that regard. Yet at the same time, it is extremely difficult for a dog shot to be more than a nice portrait. Interaction with the surroundings is expected in street photography and making that happen with a dog in not an easy task.

Composition
Steven went for a low vantage point of view and I would even guess that he ended up in his knees. This is great because it puts the viewer at the same level of the dog, or better said, we actually get the vision as a dog would. The choice to cut the human heads emphasizes even more this fact, indeedvdogs see mainly feet when they are in the street, not our cute but stressed faces.  On the topic of depth, the pictures’ three planes ensure that you get that impression and Steven did well in making sure that the legs in the store could be seen. The feet of passer-by’s show movement since they both form triangles. Note that a pair of legs and shoes can be seen on the far right behind the lady carrying the bag. This adds to the feeling of crowded street. I think the dog’s posture and expression is great, and the fact that he is in front of a black area helps make him stand-out. Yet I wonder how the picture would have come out if he had looked in the other direction. I point out this suggestion since the passer-bys all walk from right to left. The dog looking to the right could have therefore been a counter-point to the flow of the picture. Let’s leave that idea aside for the moment, I’ll come back to it. Another great aspect of this picture is the little details, such as the glasses in the man’s hand, the shoes in the upper store window, the feet postures of the two people in the store and the two cigs on the ground. They don’t really add to the meaning of the picture, but it keeps our eyes interested and looking around the frame. Finally, let’s end by a little less positive point which is the framing of the sidewalk border. I would have loved to see the whole sidewalk edge, allowing in some ways to showcase the scene on a sort of special stage.

Aesthetics
Steven set his zoom to the 35mm focal lenght (50mm equivalent on 24×36 format) for this shot and an aperture of F5.6. This was a sound choice since it allowed for a large depth of field, covering all subjects from the passer-by’s to the customers in the back of the store. Note that a smaller aperture could have been even better to make the sidewalk edge a bit more in focus. Thus it would have meant a lower shutter speed and most probably some motion blur due to the proximity of the subjects. The B&W processing is excellent with the right among of contrast. It is somewhat a pity that the woman carried a bright bag since it brings our eyes to that secondary element. This is no big deal though. Finally, I believe Steven added some vignetting to the shot. It does help to surround the action by defining edges, but it might be a bit too strong, especially on the bottom part. I used to add a lot of vignetting to my shots, but I have pretty much stopped. Indeed it always adds a sort of vintage look to the pictures, but in the end, can’t we just assume the period we ive in and leave our nostalgia aside ? 😉

Meaning / Mood / Meaning.
I mentioned the direction of the dog’s head earlier as I believe it is the key element to the understanding of the picture. By looking at the right, the dog follows the flow of the passer-by’s. That leads to the question, are they going somewhere specific or did something special just happen a few meters away ? Probably not, the dog is probably here just looking at the activity going on in front of the store. Had it looked to the right of the picture, a sense of wait would have been induced because of the direction of the traffic and give the idea of a master that left the dog for a while. All in all it doesn’t matter much, the message of the picture is clear which ever whay one wants to interpret it.

Opinion
The first time I looked at this shot, I immediately liked it. It has a mix of both that classic street photography look and a modern setting. The composition is very sound with many nice little details located in all planes. The processing suits perfectly the scene, except maybe for a bit too much vignetting. As for the meaning, several interpretations are possible but since we’ll never be in a dog’s head, it is probably best to leave it that way.

Discover more of Steven’s picture following this link. And don’t forget to check out his dog shots section if you are a fan of the genre. 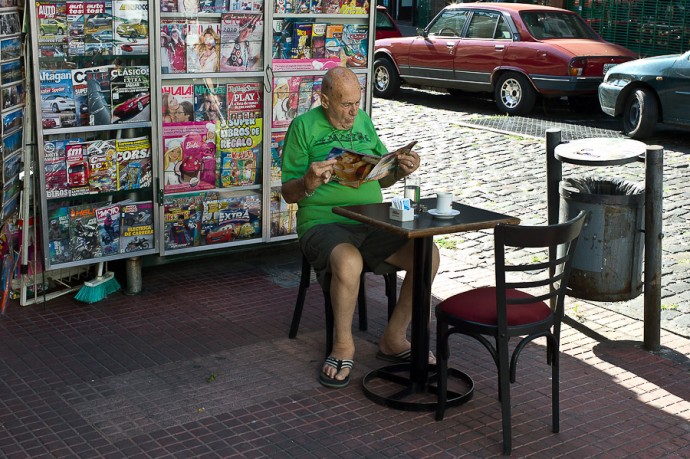 Composition
The picture is separate in two areas with different light conditions, that is the shade area of the newsstand and the paved street bathed in sunlight. These two elements also from a triangle whose top is occupied by a man reading a magazine. Usually it is recommended that the main subject does not lay in the center of a frame, and it is in this case, yet it does not bother me due to the triangle construction. The street to the right adds depth to the shot by providing an open counterpoint to the barrier impression given by the newsstand.  Maybe a little crop to the left and the bottom part would balance the shot a bit more by taking out some of that large newsstand area. A few sympathetic details can be spotted by looking closer, that is the end of a broom, a woman in swimsuit on the back of the magazine and a whistle-like expression on the face of the man. As for the trash can, like any trash can, city infrastructure planners always seem to place them  in a bad location for street photography. This is proved once more in this shot. This being said, it would have been difficult for Christophe to find a different angle to avoid it and still keep a good composition. Finally, this shot was taken at F8 with 35mm lens on the Leica M9. By doing so, Christopher ensured that all planes were in focus, and I think it was a good decision since there was information on the various planes.

Aesthetics
This kind of scenes with a huge difference in light conditions are always difficult to make work. It is especially true when shooting in colors since the saturation of the colors will vary in the two areas. Nevertheless, I like a lot of the match of the dark reds and green tones, these are colors that always work well together. As for the exposure, and given the scene, this was probably the most logical choice. Yet I am bothered by the over-exposure of the street which is way too bright compared to the reminder of the picture. Perhaps Christophe could try a localized adjustment to tune it down a little. As for the garbage can, sorry to mention it again, it definitely does not help the picture aesthetically, I almost get the feeling that the man, a chair and the trash can are sitting at the same table.

Meaning / mood / feeling
That scene tells a lot about an aspect of life in Argentina. Indeed, people do enjoy a lot the morning breakfast a a coffee. It also illustrates the typical coffee and mineral water combo that is served in all bars. In some ways, this is almost a documentary shot of life in Buenos Aires. Nevertheless, the whistle shape of the lips of the man can hint to a secondary interpretation which is supported by the title of this picture. Indeed, the man is probably enjoying a fascinating reading (or viewing). The swimsuit girl in the back cover adds to that interpretation though it is unclear what the magazine is really about. A good street scene catch by Christophe though I feel he should have gotten closer to show better the relationship between the magazine and the man.

Opinion
I like the composition and the action going on in this shot. Yet it is plagued by two big problems of aesthetics. The first one is the trash can, which was difficult to leave out of the shot, but does harm the action happening around the table. The second one is the over-exposure of the street pavement, though I am sure Christophe could fix it in post processing. Perhaps Christophe could try to crop the shot slightly on the left, bottom and right (to remove part of the trash can) as it would center the action more on the man reading its magazine. I know heavy cropping is not the most elegant way to go about it, but  in this case, I would recommend it. In fact, the underlying point is that  Christophe should have probably gotten closer or used a 50mm focal length for that shot.