Let me state it directly : on a full day street photography outing, there will be five scenes that provide the elements for a good photograph. All the rest will be about you surrendering to "click addiction", and produce shots that will inescapably join the 99.7% of crap pictures category. (related article : Robert Frank shot 99.7% of crap too.)

Five is evidently not an absolute number and my underlying point is that good scenes don't come up often during an outing. Indeed, street photography is more than a long procession of people walking, sitting or "lost in their thoughts"  (though it represents the vast majority of pictures posted online). What is more then? Well, let's put it this way : I know when I see it and you know it too. Indeed, some scenes in life are just special, be it in terms of interactions, aesthetics, humour, mystery, poetry or emotions. But as talented as you might be, these are few, and you'll need to hunt the streets for long hours to find them. 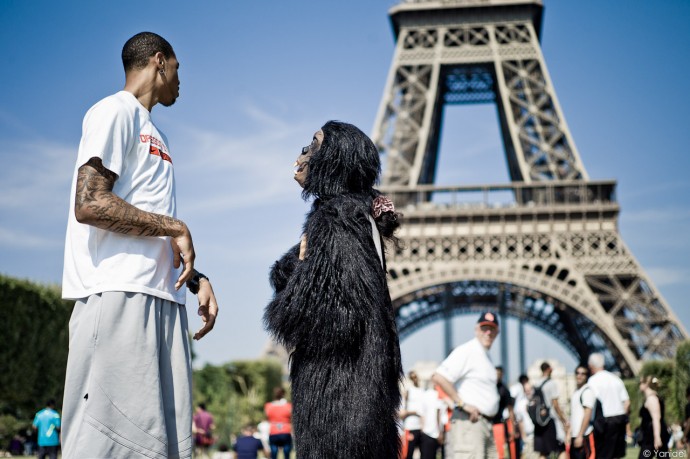 King Kong contemplating a giant Oregon State University basketball player. Quite an unusual scene in front of the Eiffel Tower. Yet I feel that my timing was slightly off for the scene to translate into a good shot.

And then, even if you do spot these five scenes that matter during your outing, it won't automatically translate into five good street photographs. Indeed, you'll mis-focus some, be off timing on others, or simply not be able to translate your initial sight into a worthy two dimensional frame. This is where technique and vision step in and will eventually allow you to convert these five opportunities into one, maybe two good shots. Obviously, we are not talking about great shots yet, which probably come in only in a handful during a year.

Yes, street photography is extremely challenging so you need to maximize your keeper rate when these scenes do happen in front of you. With that in mind, here are a few tips to help you getting ready and convert on these opportunities :

– As evident as it might seem, always have your camera ready in your hand. Not in your bag, not hanging on your shoulder, but held firmly in your hand. While in Paris last month, I met a dozen street photographers and was surprised to discover that many of them were not "picture ready". Many scenes do not last for more than a few seconds, so stop losing precious time while reaching for your camera. Remember, you only get five scenes that matter during a day, miss the first one and your success rate is already down 20%. 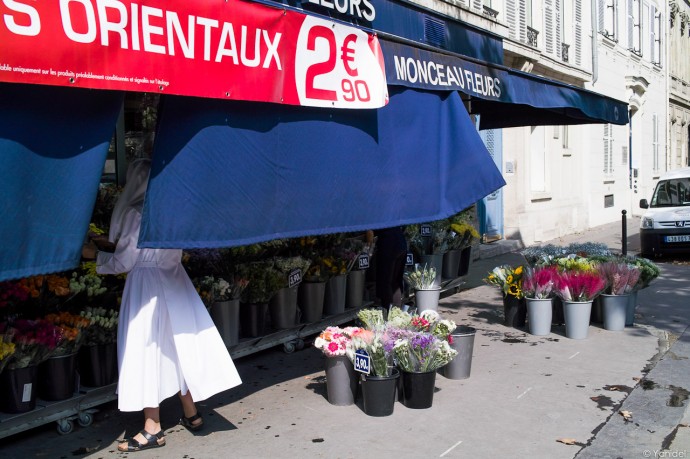 A nun buying flowers on a windy day, what a great subject for a street photograph. Nevertheless I wasn't able to pull out the shot I wanted due to contrast and angle of view constraints.
– Get the shot at all cost. Contrary to the common belief, very few street photographers are completely fearless. Shooting in the streets involves a certain amount of adrenaline as it is never easy to intrude in a stranger's life. The tip here is to stop spreading this dose of adrenaline over dozens of worthless moments, and save it for these scenes that do matter. Leave all fears aside and go get the shot, even if it involves being yelled at, crossing a road, climbing on a bench or crawling on the ground. Remember, this is only five times a day.
– Don't get frustrated. There are very few street photographers that can make a living purely out of street photography, which means that our time to shoot is often scarce. The odds to stumble on a great scene during the few hours you'll dedicate weekly to shooting are pretty low. Don't fall to frustration and "click addiction", patience is also part of the game, so accept it. Time spent on the streets is the variable that most impacts your keeper rate. Technique and talent only come afterwards. In the end, It is probably better to come back home with a few average shots than dozens of lousy ones that will just increase your frustration level.

– Special scenes often unfold while you are not out there specifically shooting. Again, this is a basic advice, but always carry a camera with you. It doesn't have to be your main system but a small P&S or even camera phone will do. You never know, aliens might land just in front of you on your way to work. Who is going to believe you if you have no camera ? (ok, this is pushing it … but you get the point) 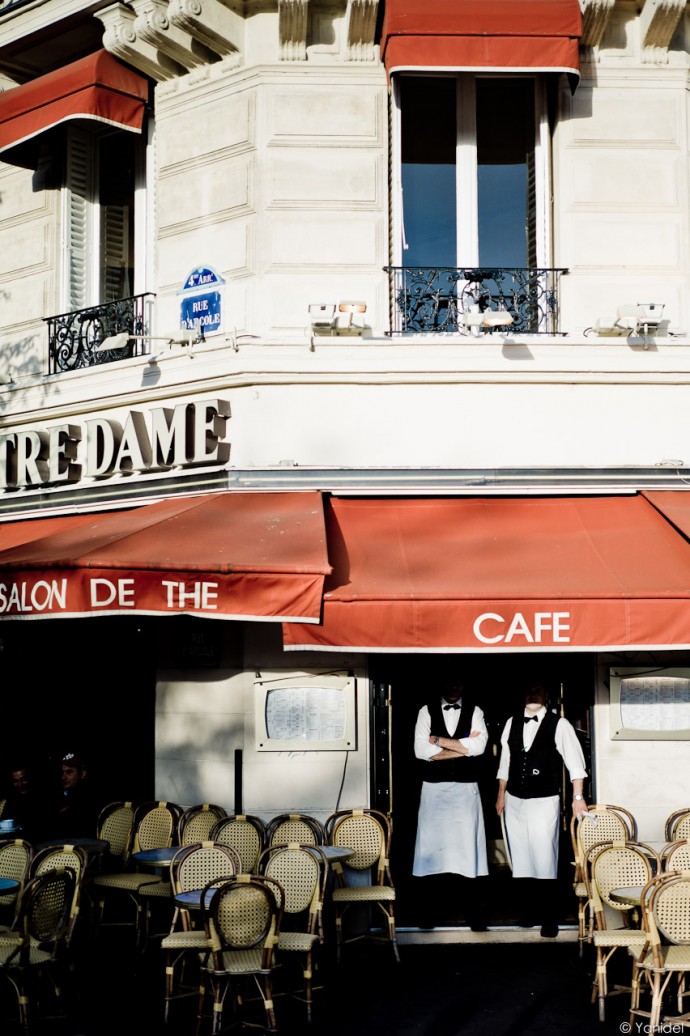 A scene that attracted my attention due to its light, colors, lines and the somehow mysterious atmosphere it rendered. Such scenes do not come by often so I did not hesitate and took a couple of shots straight away. Two seconds later, the waiters turned around and went back in the restaurant.
Evidently, it does not mean that you stop shooting when unsure about the potential of a scene. Follow your instincts when you feel you might be able to pull something out of a less evident scene. Ultimately, practice is good as it ensures your skill level and rhythm are up to the task for when the next of the five scenes that matter unfolds.