The long awaited launch of the Leica's next generation of M's was finally revealed at Photokina 2012, here are a few of my initial thoughts on the new Leica M unveiled last night (after a night of good sleep and having gone past the initial "WTF" reaction) :

After the Leica M9, the Leica M !? Thank you Apple for the marketing strategy.

– Leica is expanding out of its niche by adding mainstream features to its new flagship M camera. It does make a lot of sense as an attempt to attract a wider range of professional photographers (landscape, portrait, studio, …), as well as amateurs who kept away due to the rangefinder focusing system. Live view, video, focus peaking, weather seals and tethering are all specs that are expected in pro systems nowadays.

– I am convinced that the 24 mpx CMOS sensor will produce stunning quality and improve significantly the low ISO capability of the M system. Yet, will it keep the greatly appreciated CCD look rendered by the current M9 sensor? Based on the few pictures I have seen so far, I have some doubts.

– Leica M + electronic viewfinder + additional grip + R adapter will easily push you above $10'000. And you still have no lens to go with it. Quite an investment for pro photographers (and even wealthy amateurs) for a system whose extra features where include to replicate most of the capabilities of cheaper Nikon or Canon pro cameras. Will the new Leica CMOS look be enough to convince them ? This is the big question mark.

– Will the new features allow additional capabilities in street photography? Not really since focusing with live view will still be slower then using the rangefinder mechanism. The use of the LCD will help with higher or lower vantage points of view for those in search of more creative framings. As for the new high ISO range (6400),  if quality is as good as promised, it will definitely be a great improvement compared to the current M9. Low light street shooters will appreciate.

– The new Leica M gains on weight and size. Though it represents only 90 grams and 5mm width increases, it does make the camera bigger. I thought the M9 was about right and would even have liked to see a decrease in size and weight.

– The mega pixels war goes on. I'd say that 10 to 15 mpx was enough for street photography. Adding pixels also means that we need to keep on updating our computers. More ram, more storage, more pixel peeping and of course, less … cash.  Meanwhile, 99.9% of pictures still won't be printed at sizes where the extra pixels will matter. 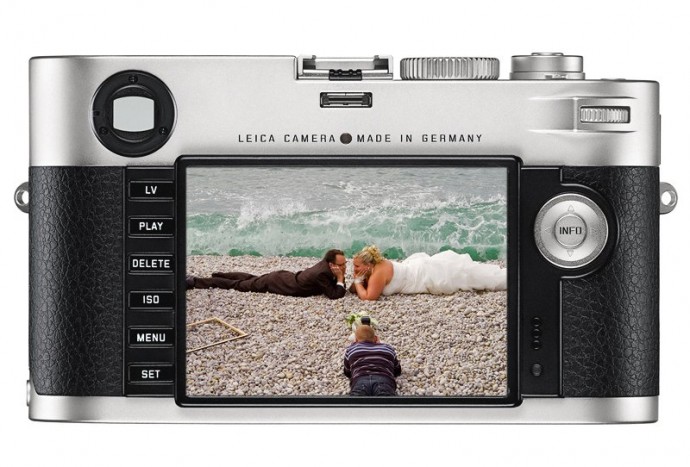 The new LCD is 3' and boasts a 920K resolution. A great improvement for reviewing your pictures away from home.

– The R lenses to M adapter is definitely a great news for R system owners. This being said, mounting such large lenses on such a small body definitely seems odd. Not the best technical solution, but definitely better than nothing if you are already heavily invested in this system.

– Looks like Apple had a big influence on Leica for his new branding strategy. Leica M sounds great, but what will happen with the next generation of products ? Will Leica launch a Leica M Mark II ? Will we see a more traditional M10 in the future ? I thought the simple product numbering that Leica had going on was great and simple. Ultimately, this might be the first signs of a split in two different M lines.

– As I wrote on Twitter last night "Video on a Leica M sounds like cruise control in a Ferrari". Yet, leaving my purist hat aside, why not.  If you don't need it, don't use it.  But since pro photographers are more and more requested to also produce video materials, its inclusion does make a lot of sense.

– Smart move by Leica to keep a de-featured version of the M9 on the market (Leica M-E). Though the product itself looks more like an attempt to not piss off current M9 owners (and the resale value of their product) rather than really providing a lower cost product.

All in all, kudos for Leica for coming up with a camera that bridges its traditional rangefinder system with modern technologies. By doing so, it has produced a versatile camera that will appeal to a much wider array of pro photographers and amateurs, while keeping the must-have features. This being said, I also hope that there are some plans in the future for a true M10 that builds on Leica's long standing tradition in the street photography and reportage disciplines. The M9 is a great camera and with a few tweaks, a true M10 could become the paramount tool street photographers.