As you might have noticed, it has been some time that I haven’t written a Critique-a-shot column. Indeed, I have been very busy with trips and other stuff going on here in Argentina. I intend to keep it going, but given that the core part of the trip is coming up soon, I’ll decrease the frequency of posting and limit it to one picture by post.

This week’s shot comes from a place which I know pretty well, that is Austin, home of the University of Texas (I studied for a year at its rival university, that is A&M). It is a crazy city, great mix of liberalism and hippy world. It’s famous 6th street is also one of the best place in America to listen to music. Therefore when JB sent me this shot, it brought back many memories of very fun times. 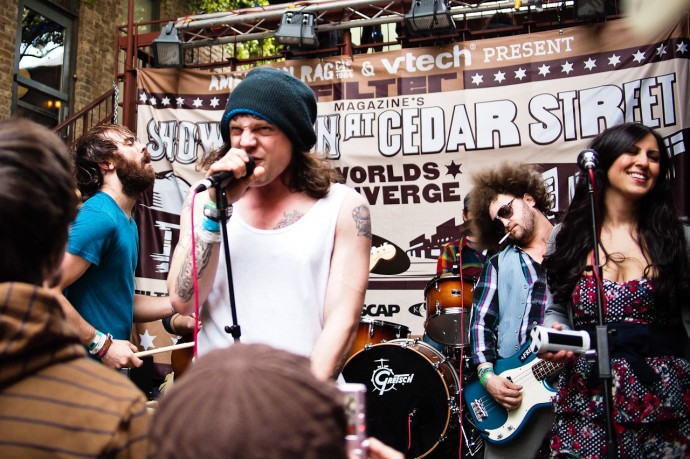 Overall, this is a very good composition. Indeed, most of the members of the band are located in a position that allows a clear read on their expressions. Only the guitarist and the batter are partially hidden. The singer’s head, which is the central point of attraction, follows the rule of thirds. I especially like how the drums connect the left and right part of the picture. The shot has some depth too since JB included 5 different planes in the pictures (the spectators, the singer, the rest of the band, the banner and a small vision of the backstage).
On a less positive note, I am a bit bothered by the big brown hat in the foreground. I wonder if the composition would have worked better if JB had position himself slightly to the left (also allowing a better view on the batter). Finally, it is a detail (yet details count in the quest for perfection), but something got into the field of view in the top right corner.

JB used a Olympus E-P2 with the Panasonic 20mm 1.7 lens (40mm full frame equivalent). What a great combo when ones wants to travel light and retain good low light capability. I initially thought that the shot was taken in the interior but after closer examination, a view to the sky can be seen in a reflection on the left part of the picture. Light conditions were therefore pretty good to allow for a shot without motion blur, and JB could indeed use a shutter speed of 1/250 at ISO200. These good light conditions also should have allowed a precise and fast focus with the E-P2. Nevertheless, it seems that something went wrong since focus locked on the area where the guitarist is located. The singer therefore resulted slightly off focus, which is ok on a small web image, but will definitely show in a large print. Perhaps JB should have pumped up the ISO’s, reduced the shutter speed by a stop and use a smaller aperture to ensure a larger zone of sharpness.

The color space works perfectly with a good mix of browns, reds, and blues. I’d say it was slightly desaturated, yet it could be an effect of the white balance since choosing the dominant light source must have been tricky. I also like the way the foreground was thrown out of focus, which really gives a sense of immersion into the scene. JB shot at F1.7 to create this effect, which unluckily also contributed to the singer being off focus.
Finally, let’s mention the fabulous facial expressions of the band members. JB really got it all in this shot from the extasis of the guy in the left, the furious grin of the singer, the flying high Kravitz style guitarist and the beautfiful smile of girl connecting with the audience. I would even add that it is the cigarette and expression of the guitarist that makes the whole shot, priceless !

The first question that came to my mind when I saw this shot was “Is it street photography ?”. The answer I came up with is yes. Indeed, this shot really gives the impression of a moment in life of JB. He went to an event, and took a snap of a band performing. It was unplanned, unstaged and there is enough elements outside of the band itself to give it a street feel. It is also good in documentary terms, since it really gives a great idea of the spirit of the city of Austin (the music festival sponsored by a high Tech company …). Finally, let’s nonetheless mention the somehow odd title “Southern Gothic”. Indeed I do understand the reference to the South yet I am not sure that gothic is the most appropriate to describe this shot. Maybe I am a bit too stuck with memories of gothic people dressing all in black 😉

I love this shot. It has a David LaChapelle feel, almost like everything was staged by the photographer. But it was not and therefore is a great street photography shot. Composition is very sound, colors work perfectly and all characters add to the scene. The main criticism is the singer being slightly off focus, even though I clearly prefer to have the guitarist in focus. He is indeed the real star of this shot. Congrats JB and … Gig’em 😉

You can find more of JB’s shots by clicking here.