Imagine you just spotted a great street scene. It is now time to raise the camera to your eyes and snap. Click! The shot is in the box, easy isn’t it ?

Unluckily, street photography is much more difficult than it appears as many variables come into play in a split second for a given scen. A great shot will be the result not only of your ability to spot a great opportunity, but also on your capability to think about all the elements that matter in a shot. This article therefore details some of these elements with the corresponding illustrations.

I) Keep the horizon line straight.

While it might seem easy to deal with it, keeping the horizon line straight is actually one of the most challenging variable to take care of in street photography. Indeed, lines and a scene’s action will unconsciously have you sway your camera to one side or the other. It might work for some shots and go unnoticed in other ones, but overall it is better to avoid bent horizon lines in your shots for simple aesthetical reasons. The best way to counter it is to look for a horizontal or vertical line within your field of view and align you frame’s edges with it.

In the shot below, I probably got fooled by the position of the girl in the first plane. It led to a picture with a horizon line strongly bent to the right.  (click on pictures to enlarge) 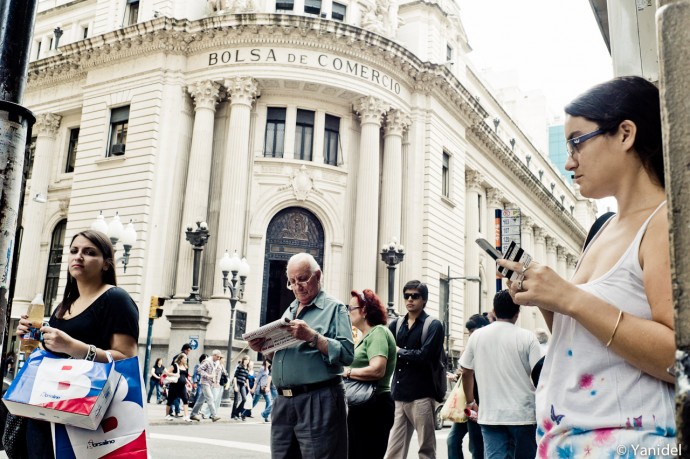 The shot below illustrates this. In my urge to get the candid shot, I did not pay enough attention to the men crossing behind my subject. Had I clicked a little later, she would have stood out more from the background. 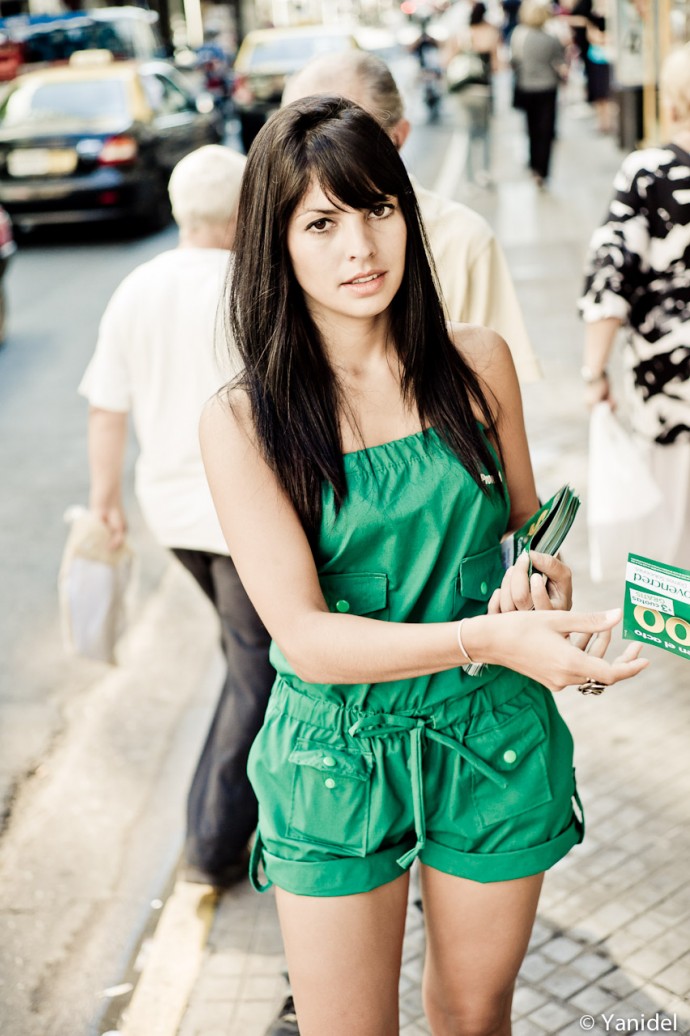 III) Watch out for you own shadow.

In general, it is easier to shoot with the light coming from behind you, but that also means that a little friend will always follow you : your shadow. Even at times were you think it is not there anymore, it will suddenly appear over your subject  just as you raise your camera. To avoid it, make sure your shadow is never in the 90 degree radius of where you point your camera towards.

Though it is actually a reflection, I never noticed my shadow at the bottom of this picture. You shadow can take many forms, don’t let it fool you. 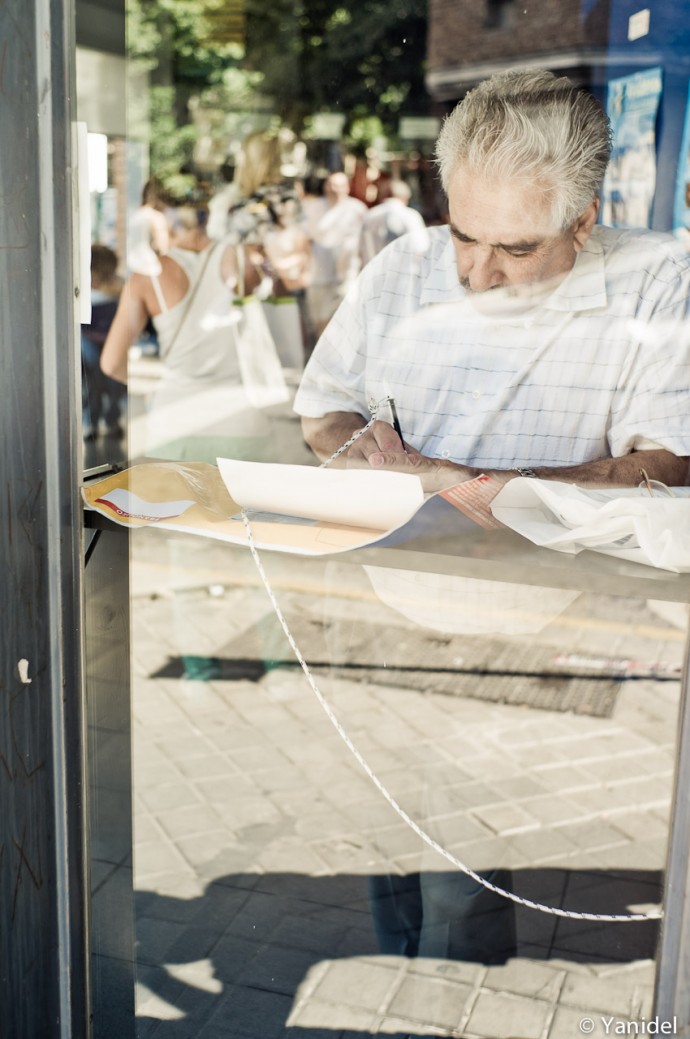 IV) Keep an eye on the elements about to enter frame.

You are ready to snap and suddenly a big truck enters the frame as you click. Shot ruined. All your senses need to be ready, not only for what happens within the frame, but also what is around it. Use your left eye and even your ears to anticipate these intrusions. Note that a rangefinder will somewhat lessen this issue since the framelines system allows you to see a significant portion of the action happening around your frame.

Below is an example of a car cruising in my frame unexpectedly. Since it was at a corner of a street and the car was going very fast, I did not anticipate it. 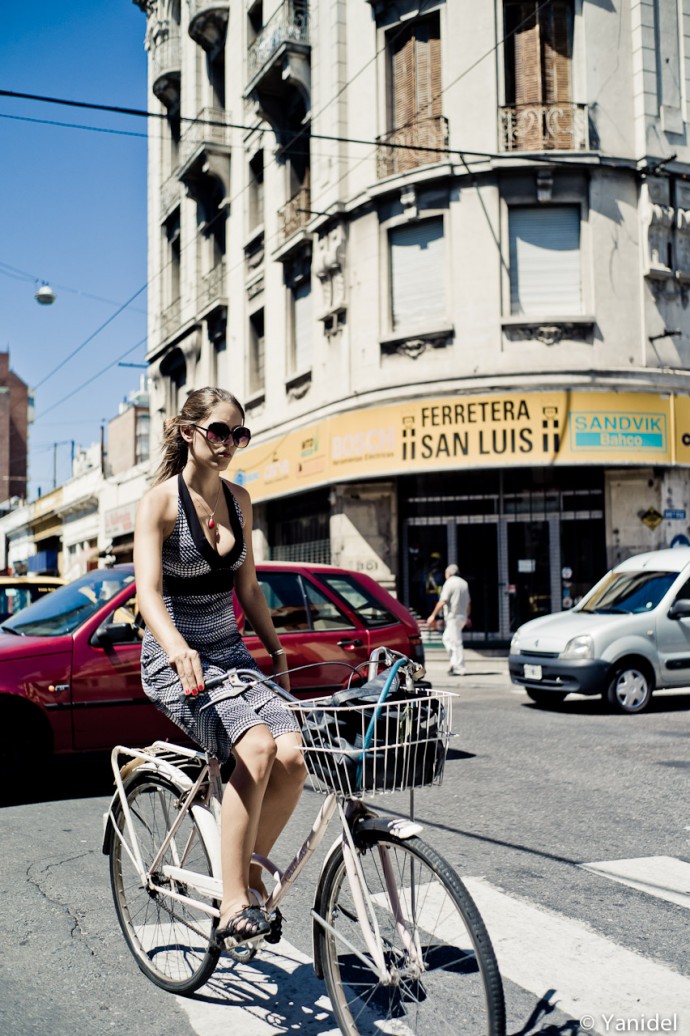 V) Don’t be a butcher

Of course, one always wants his initial vision to be completely retranscripted in the final shot. Nevertheless, the inertia of a scene will often cause you to slightly reframe unconsciously. This in turn will lead to cut feet, arms or even heads. Add to that the parallax and inaccuracies of the framelines system of rangefinders and you might exclude an important part of the picture. Ways to avoid it is either to frame wider (and crop in post processing) or to adjust your position to offset the parallax and framelines inaccuracies.

In the scene below, I unawarely cut a bit of my subject’s hand. I believe it was an important part of the picture since his hands were key to understand his expression. 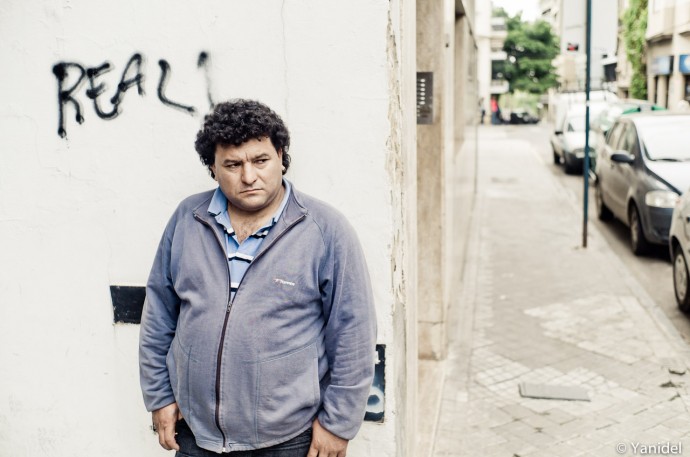 VI) Make sure there is enough light on your subject.

This is one of the most recurrent mistake I see on street photographs, that is faces that are partially in the dark. It is obviously not always a given to have the perfect light condition for a scene, but faces covered with shadows  will usually ruin a picture. Try to move around so when your subject finally enters or looks towards the adequate light zone, you are ready to trigger.

The shot below is a street portrait of an ice cream vendor. I absolutely wanted to keep depth in the shot and compromised on his head’s position which partly laid in shadows. It was probably not the best decision. 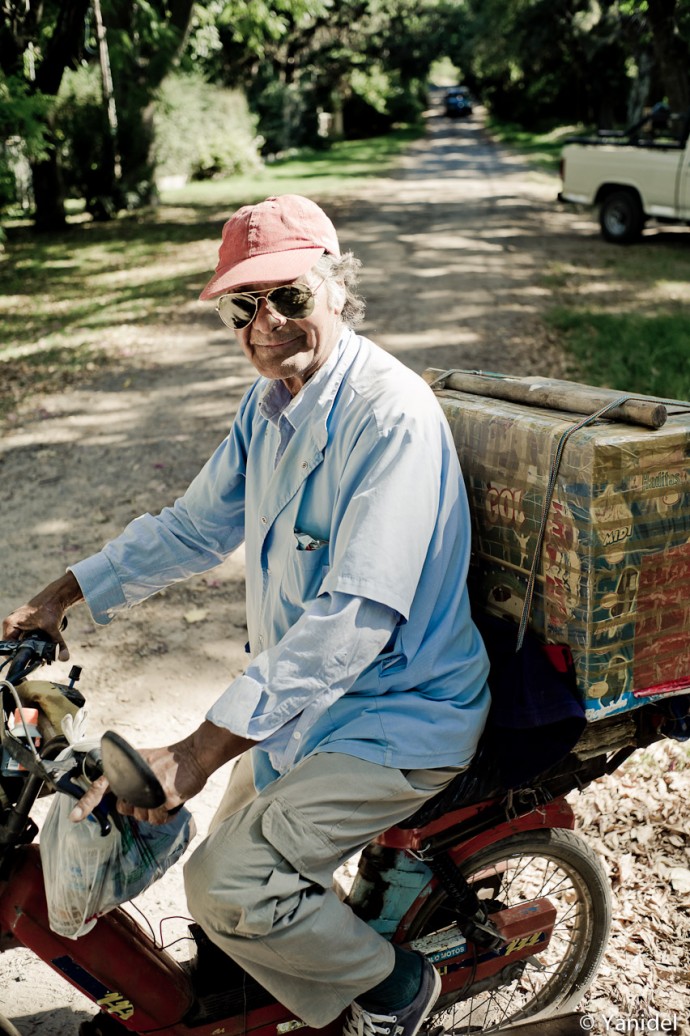 Distortion will happen whenever you tilt your camera compared to vertical lines. The wider the lens, the strongest will be the distortion effect. It will be especially felt by those using 28 or 35mm lenses, but also by anyone using lower or higher vantage points in their shots. As an example, this is a big issue to me since I am very tall and tend to tilt my camera to shoot my subjects. To minimize it, I often need to bend and even kneel which is obviously not always convenient and stealthy. To avoid distortion, keep your camera as straight as possible compared to virtual horizontal or vertical lines. In some cases, it will result better to change both the your vantage point and composition to keep your picture almost distortion free. In most cases, some distortion will ocurr and honestly don’t make too much of a deal of it.

The following shot shows the distortion induced by a low vantage point. I actually kneeled for this shot and my subjects were walking down a steep street to add to the distortion effect. 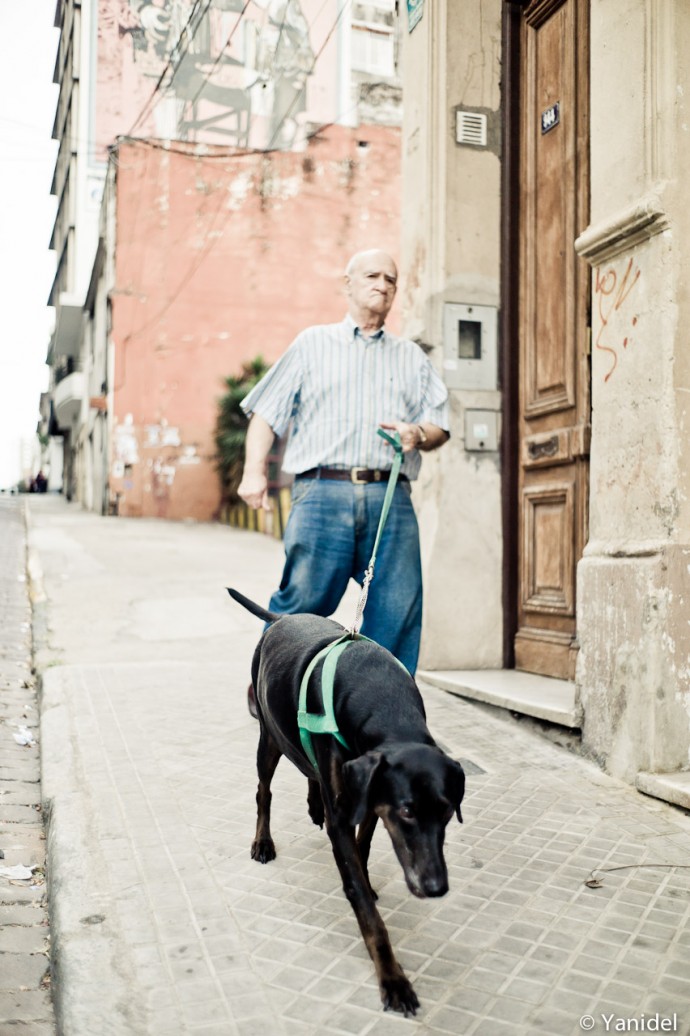 VIII) Both heels always on the ground.

When shooting people as they walk, this basic tip will make sure that the whereabouts of your subject are clear. Hit the trigger while a leg is behind the other and you might give the impression that he is actually standing still. To the opposite, a nice triangle formed by the legs will always be understood by the viewers.

On top of being badly framed, the picture below is not very clear on the boy’s whereabouts. Is he walking or standing still ? 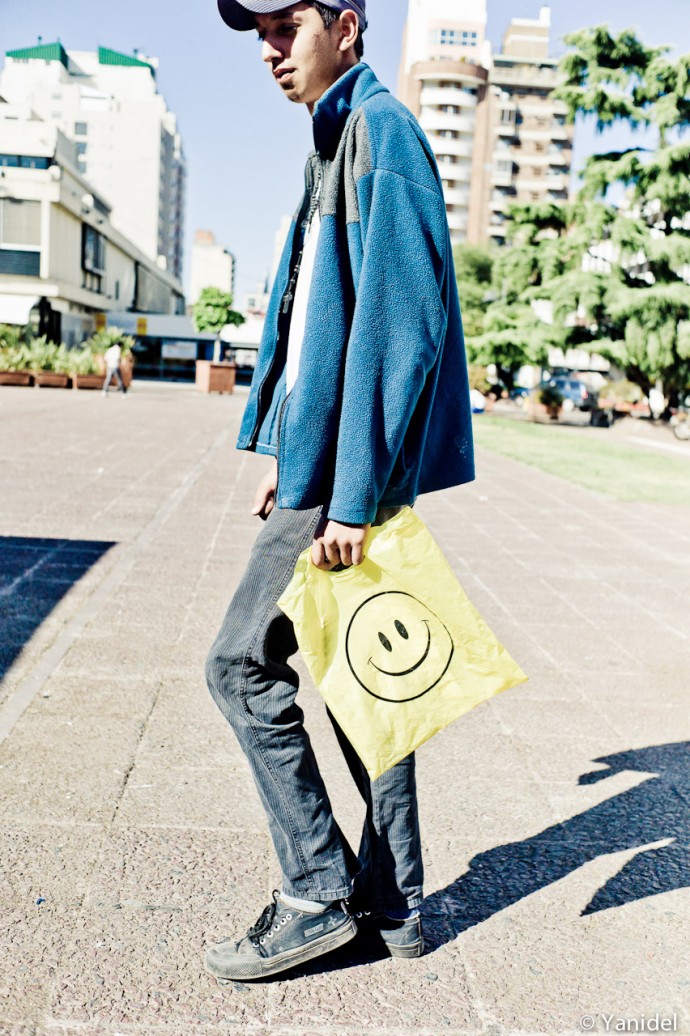 IX) You can’t be caught in the window.

Leave your narcissism aside and make sure your pretty face doesn’t appear on the picture everytime you shoot a scene with a glass surface.

Though I had noticed the glass surface, I still managed to get in the shot. Can you find me ? 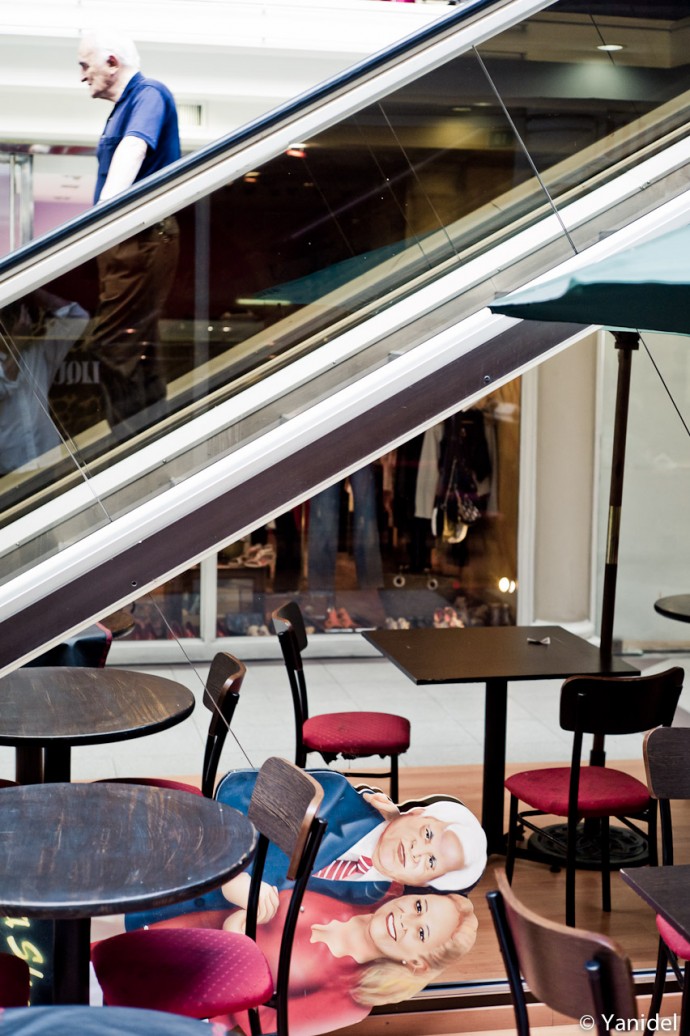 There is nothing worse than taking a great shot and suddenly realize that you forgot to adjust your exposure. Always keep it in mind; exposure settings are the one thing to always remember, especially when using your camera in all manual mode. A bad exposure will lead your shot straight to the trash bin (note that I will soon publish an article on manual exposure technique)

The shot below illustrates a light condition that is usually tricky for automatic exposure systems. The large shadows area and off center subject might lead your camera to a wrong interpretation of the scene. Nevertheless in this instance, I exposed for the highlights and it resulted to be the correct decision. 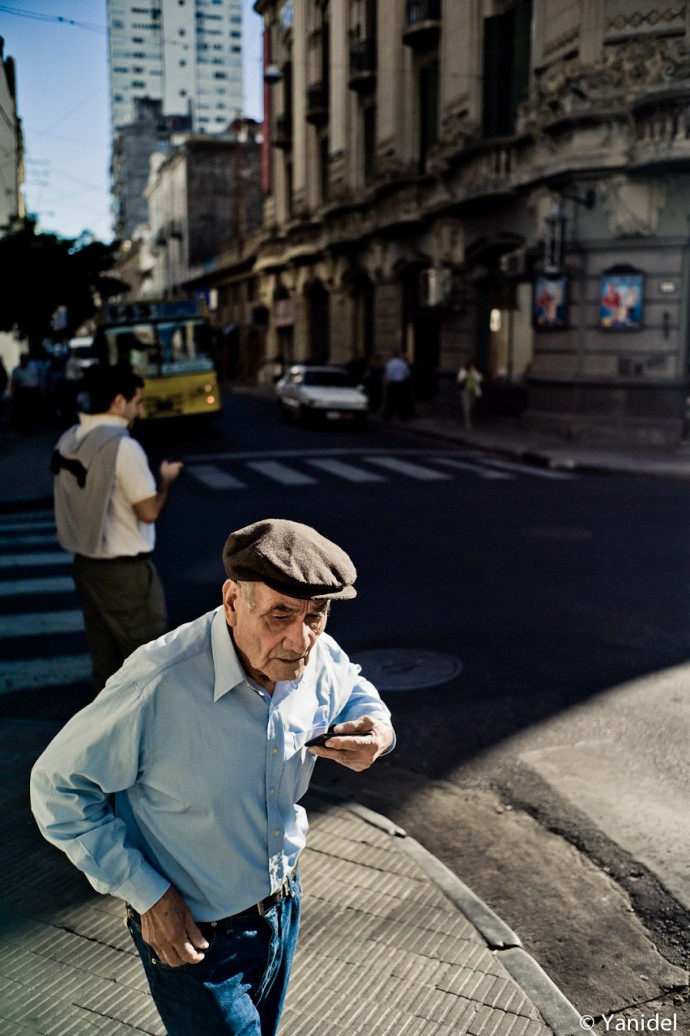 Obviously, always make sure your focus is spot on, how many times have you shot a great to realize afterwards that your focused on the wrong point. For those on manual focus, the use of the zone focus technique will minimize the risks. Yet for photogs that like to shoot wide open like I do, the resulting depth of field is often very thin and might lead to your intended point being off focus. Therefore a perfect estimate of distance and a great timing will be needed. (click here to discover a previous article on this topic)

I saw this “Lord of the keys” approaching and decided to shoot wide open. Indeed it allowed me to stay at a high shutter speed while not changing the ISO’s (I had not time for it). My timing was slightly off and my subject’s head resulted somewhat out of focus. Too bad because it could have been a great shot. 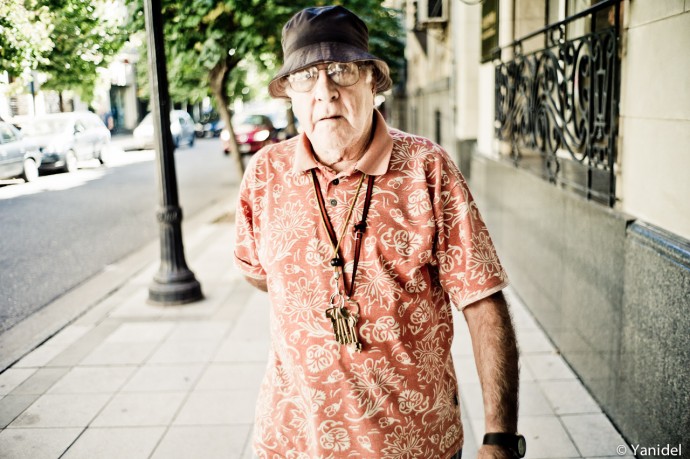 Let’s end by my personal obsession which the depth of a shot. A photography is basically a three dimensional scene reduced to two planes. In order to give back some of that 3D feeling to your pictures, make sure that there is depth in your shots. This will be achieved by adding space behind or on the side of the main elements of your scene.

Have a look at the two shots below, the feeling of three dimensionality differs completely from one to the other. Add a wide open area to the right and the feeling of depth is much stronger. 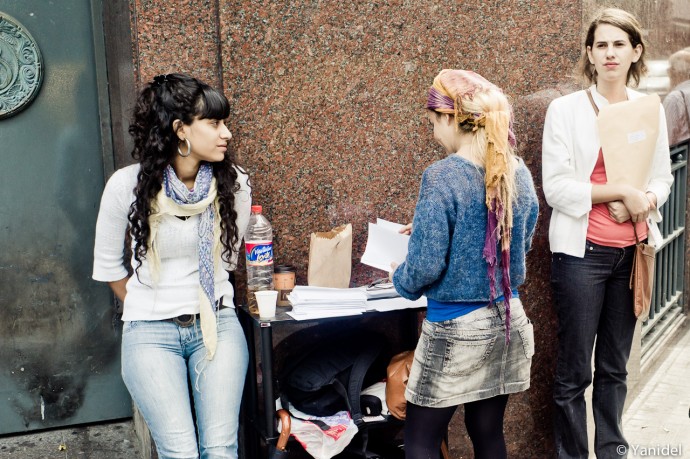 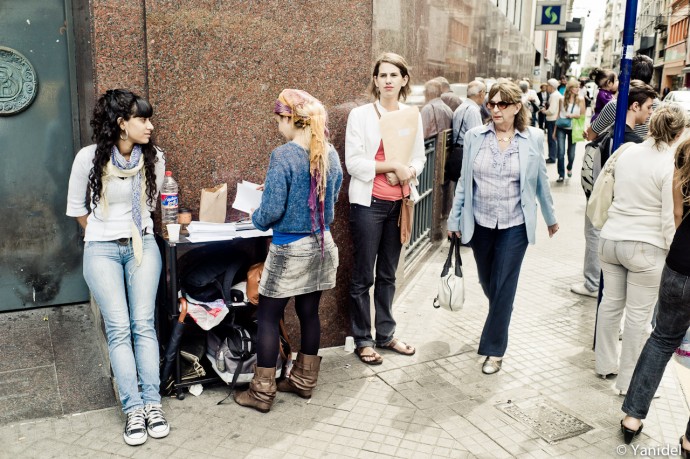 So, who said street photography was easy ?

I guess that if you can consistently hit on the twelve points and find great scenes to showcase your talent,  you are either the Terminator or Henri Cartier-Bresson. If not, pick those points whose trap you constantly fall into (and ones that I might not have included) and think about them before every single shot you take (I often tell myself buzzwords like “depth” or “background” before I click). Do it again and again, until it becomes second nature and instinctive. Obviously, these points represent generalities. Rules are made to be broken and one might use distortion, over-exposure or, why not, his own shadow as part of a style.

Any other point you think about before you click ? Do not hesitate to write about it in the comments section.