This week, let’s look at two shots from the UK. 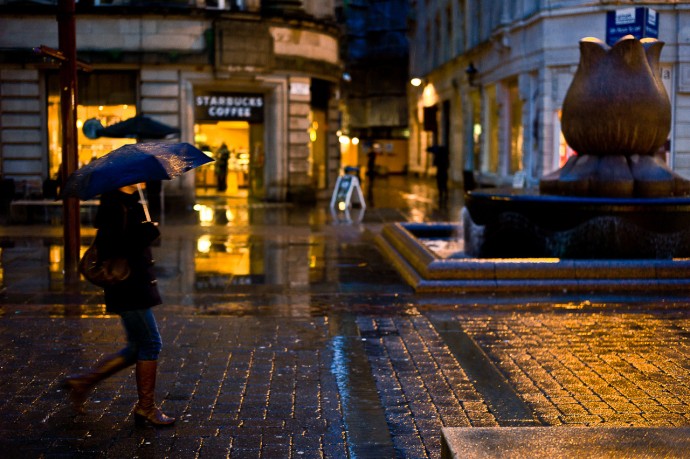 Composition
The scene is composed using the rule of thirds, though many of the lines do actually cross in the center section of the picture. There is a lot of depth in the shot which is always a good thing to preserve the three dimensionality of a scene. Christakis carefully framed since all key elements are well positioned in the frame (sculpture, windows, posts). Neverthless, I am not sure that the main subject was positioned in the best position possible. Indeed the umbrella of the girl finds itself in a middle of a flurry of shapes, be it the post, the windows or the triangle structure hovering over it. Since this is the key element, it bothers me somewhat. Perhaps Christakis should have waited for one more step and the girl would have been located in the middle of a more uniform orange light. It would also probably have helped to better distinguish her silhouette. Finally, take notice that Christakis was able to form a great triangle with the legs of the woman, perfect timing there.

Aesthetics
The lens used for this shot is the marvelous 50mm Summilux Asph, probably one of the very best lens. The shot was taken at F1.4 on a full format sensor, creating the out of focus plane behind the subject. I think Christakis used this aperture because of the low light conditions, and to keep a shutter speed that would still allow for acceptable sharpness. One can clearly identify the plane of sharpness by looking at the pavement. The girl with the umbrella finds herself in that plane so good job on the focusing. Nevertheless, since the girl is located on the dark side of the picture, my eyes get a bit too attracted by the very sharp zone on the lower right end of the picture. This creates a bit of a unbalance in my opinion. This feeling is further increased by the fact the the girl is slightly blurred. Indeed, at 1/90th, motion blur could not have been avoided and it does add a nice movement feeling to the scene. The light itself is gorgeous, though I do feel the shot is slightly under exposed. Given the 1/90 shutter speed shown in the EXIF data, it means that Christakis used the aperture priority mode of the M9. At night unluckily, the internal lightmeter often gets fooled by the various light sources, it is probably what happened in this instance.

Meaning / Mood / Feeling
Christakis titled this scene “February blues”. It illustrates one of the trap photographers often fall into. Is the title referring to the main subject depicted or to the photographer state of mind ? If it refers to the subject, then there is absolutely no element that sustain that the girl is in a “Blues mood”. She could actually be very happy, or simply hurried to get home. So watch out with the title you give to your shots, though obviously, it will always be the image that does most of the talking. As for the meaning of the picture itself, it is simply a scene of a probably cold rainy night. It is simple but effective, no need to always tell complex stories. Moreover, the picture stands as much for its general mood than the subject itself, I think Christakis depicted well the atmosphere of that night.

Opinion
On one side, the setting of the scene is well constructed both in terms of light and composition. The decorum was definitely there for a great street scene. I also feel the girl with the umbrella was a good choice of subject to include in this setting. Nevertheless, the shot kind of fails because of the position of the main subject. Probably by a step or two only. The left part of the picture is simply too dark and creates an unbalance with the right part. I wonder if increasing the exposure of the picture by half a stop and adding a further third of a stop to the left part of the picture could improve it. Maybe an experiment for Christakis to try.

Christakis started a street photography blog on Manchester a few months ago. Discover his daily pictures here.
Untitled by Khan 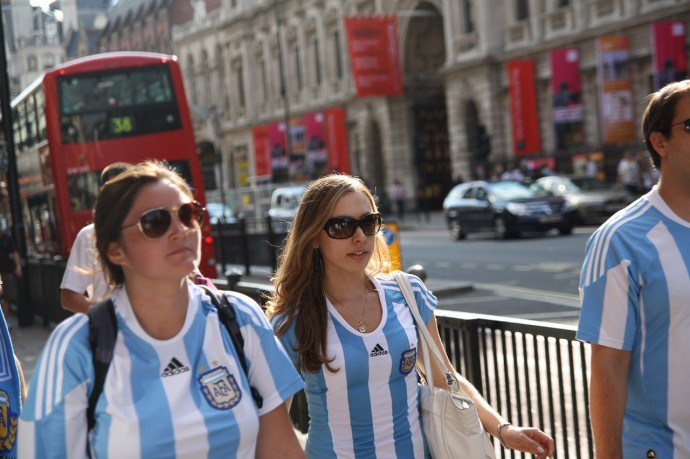 Composition
This shot was probably taken as Khan walked by his subjects. I guess he raised his camera quickly to get as close as possible without being spotted. The resulting composition is very approximate. Indeed, the horizon line is bent and there is no real organization of the elements located  both in the first plane and the background. I would think that Khan got obnubilated by his central and good looking subject 😉 This leads me to the point that one should always keep his attention on the background. This is often the difference between a good and great shot. Despite the unorganized background, Khan did include the typical British bus which in the case of this shot helps locate the action and adds a potential meaning to the shot.

Aesthetics
Khan probably shot this scene wide open to achieve selective focus on the girl located in the center of the frame. While selective focus is often a great tool to have one of the subjects stand out, I don’t think it was a wise decision to use it on this scene. Indeed, the picture is really about all the fellows dressed with the Argentinian football shirt, not only the girl in the center. Khan should have probably stopped down his lens to about F8.0 to get all subjects in focus. As for the exposure, it is spot on and the light is great. I also like the red and blue colors that were included in the frame, they are always interesting to work with. In this case, the red of the bus mixes well with the blue and white of the shirts.

Meaning / Mood / Feeling
Is this shot about a cute girl walking in the street or is it a disguised political message of the rivalry between Argentina and the UK ? Indeed, the Malvines war is only three decades old, so it could very well be an allusion to it. Or in other words, Argentinian beauty invades the streets of a UK city. If the shot was simply about a good-looking girl walking in the street (like suggested by the selective focus), then there is really no message to it and let’s call it a street portrait. Shooting attractive girls or boys in the street is very tricky because one often think that the picture will stand by itself just on the beauty of the subject. It might be true to the novice eyes but will result uninteresting to more expert  and scrutinizing eyes. Indeed, be it the composition, the light, the interaction or the mood, there must be more then a beautiful face in a picture.

Opinion
There is no doubt that Khan did spot a very interesting scene in the street, both in terms of subject and aesthetics. Yet it fails in most aspects, especially due to the approximate composition and selective focus. These shots are obviously very difficult to time correctly, there will always be a car, a passer-by in the background. Yet by giving as much attention to the background as one does to the key elements, one will frame having the whole picture in mind. It is no easy to achieve though and comes only with a lot of practice in the street. Still, I would suggest Khan to redress the horizon line in post processing, it will also frame tighter on the two girls and take out some of the distracting details (post and scarf on the left of the picture). The final output should still be a very pleasing street portrait.