Obviously, any focal length will do in street photography and your creativity is really the only limit to how you perform with them. It is therefore not uncommon to see people hit the street with a 21mm, 28mm or even 75mm lens as their standard focal length. Nevertheless, the 35mm and 50mm focal lengths have traditionally been favorites of street photographers due to their versatility and ability to reproduce a field of view similar to the human vision. Many photographers, especially in reportage, actually do use both focal lengths  (or have a zoom that covers both), yet they most often do have a preference for one or the other. Indeed, one is either a 35mm or a 50mm shooter.
So what kind of shooter are you ? Looking to buy your first lens for street photography or having doubts on your own preferences, here are some clues to help you to choose the focal length that will suit best your needs. 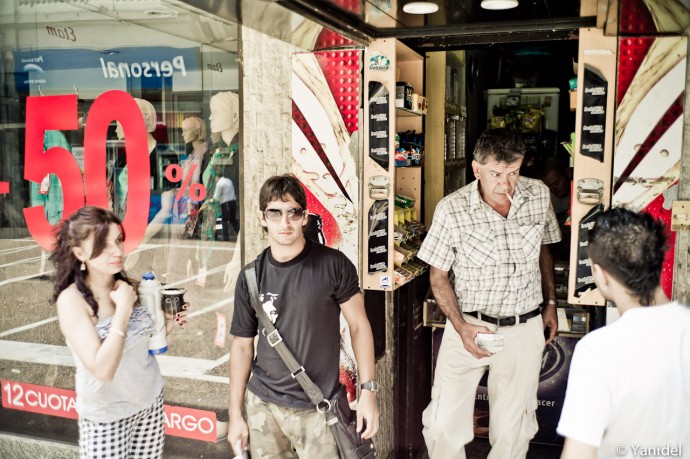 A) Distance to subject.

Unobtrusiveness is often key to street photography. How close can you get to your subject without being  detected and therefore alter the course of a scene ? Evidently, the closer you approach, the bigger are the odds to be spotted. In street photography, most pictures are taken with the main subject located in the 1.5 to 3 meters range. This in turn means that the difference between a 35mm and 50mm focal length at these distances corresponds roughly to two steps. In other words, using a 50mm lens, you will have to step back two steps to get the equivalent field of view of a 35mm lens. These two steps don’t seem much, yet they make a whole lot of difference in some situations. Indeed, we all have a sort of comfort zone around us as we walk in the street. This zone varies depending on the situation and location. For example, you’ll face no issue to approach people within a meter in a busy shopping street, yet you’ll definitely have them feel insecure if you near them within 2 meters in a deserted park. In a urban environment, the two extra steps provided by the 50mm lens will often make a big difference. You’ll be able to keep enough distance to your subject so he feels that his comfort zone remains untouched. You’ll either remain unspotted or you subject won’t feel threatened by your shooting. For that reason, I think that a 50mm lens is a good way to start for a beginner in street photography. It allows you to take pictures of people without getting too close and let’s you time to learn how to interact with people. 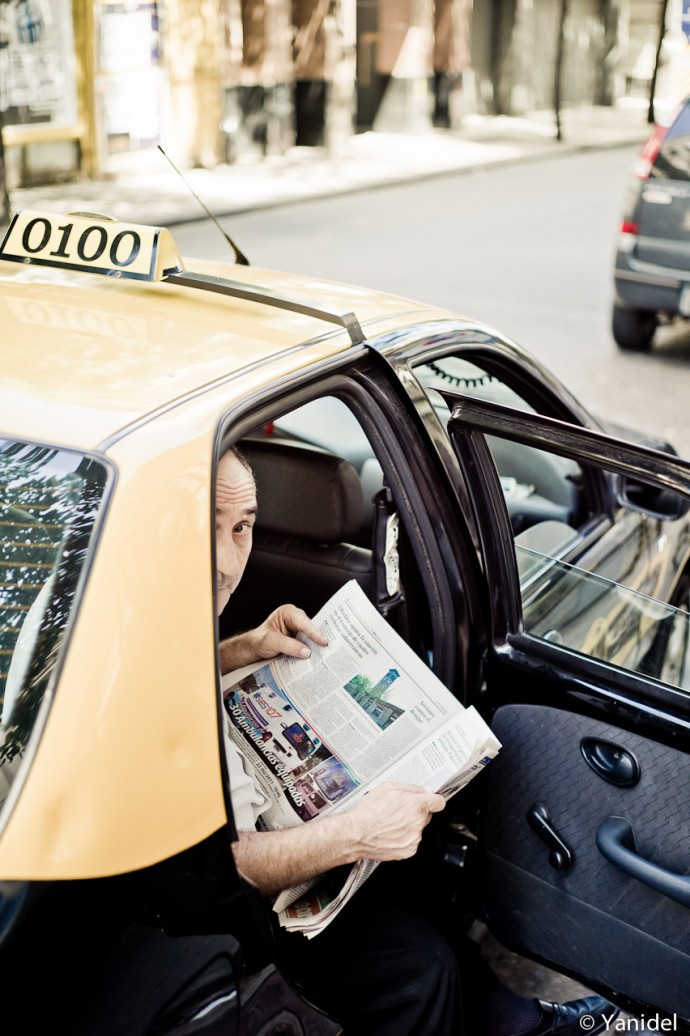 Let’s say it straight away, there is not one focal length that is easier to work then the other one in terms of composition. Both can be very easy or very difficult. The 35mm focal being obviously wider, there will be more room to compose with. When viewing street photography pictures, I often feel one of the main issue is not the subject of the picture, yet what comes around it. Unorganized, irrelevant, disproportionate … are the terms that often come to my mind when looking at pictures taken with wide angles. This is often due to the empty space around the point of interest, as if the photographer was obnubilated by action and forgot to look around. Nevertheless, the 35mm focal length is great when you like to include a lot of the environment around your subject in the frame. It is also very handy in cities where streets are narrow (though 28mm is probably even better). The field of view of a 50mm being tighter, there are less elements likely to interfere in your frame. You don’t have to worry as much about secondary elements such as passer-bys, cars, or building walls. This makes it easier in some ways to have to concentrate only on a few critical elements. Yet, looking at it the other way, a 50mm makes it much more difficult to include the key elements in a tighter frame of view.  You’ll have to either back off (which is not always possible) or take a different angle, which can be quite challenging. The result can often be cut heads, legs or feet or simply missing on one of the key parts of a scene. 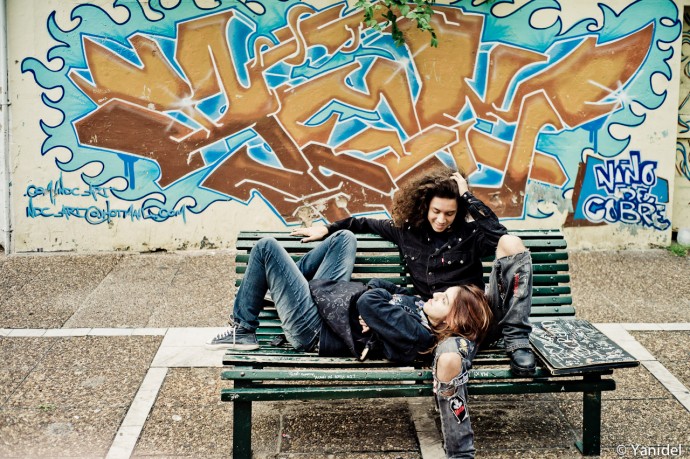 For a given aperture and distance, the shortest the focal length, the largest the depth of field. This is true to all camera systems, yet is especially important with large sensor (or film) cameras. Indeed, at 3 meters, a 50mm lens at F1.4 will have a 30 cm zone of acceptable sharpness while it will be double to 60cm with a 35mm lens at the same aperture. Even at F8.0, the depth of field of 50mm lens will be of 2 meters, while the 35mm will have be in focus for 5 meters. More practically, these numbers have three consequences. First it will be more difficult to get your subjects in focus using a large aperture on 50mm lens since the zone of sharpness will be very thin. Secondly and consecutively, you will lose shutter speed as you close the aperture to achieve a longer depth of field for a given ISO level. This will expose you to blur if speeds go below the 1/125th range. This evidently can be somewhat compensated by a raise of the ISO level, yet it is not always possible to change ISO’s as scenes often unfold very quickly (even more on film cameras for sure). Finally, 50mm shots with subjects situated on several planes will be more difficult to execute since it will be difficult to get a zone of sharpness covering all planes. As an example, if you first plane stands at 3 meters from you and the second one is at 7 meters, only a F16 aperture will get both of them in focus. Imagine the consequences on shutter speeds and image quality (diffraction) at such small aperture. Again, these numbers refer to a full format sensors, so these consequences will be felt to a lesser extend on cameras with smaller sensors and it will be a non issue on compact cameras. 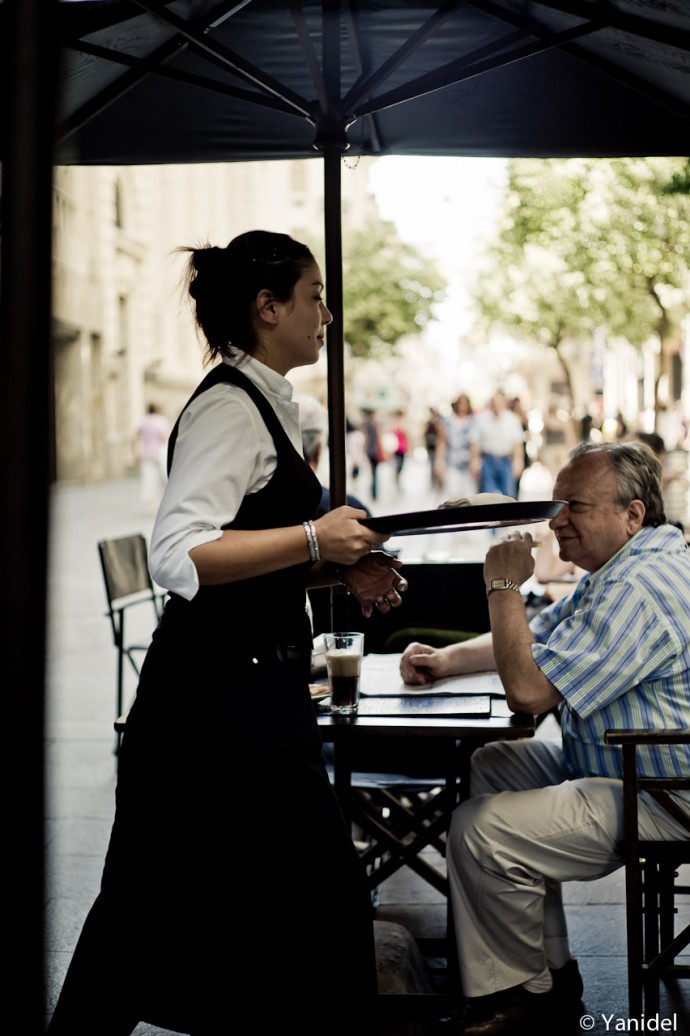 A 35mm lens will induce more distortion then a 50mm lens. Not so much because of the lens  intrinsic quality, but because a slight tilt of the camera will results in lines starting to converge. So if you like to take street portraits from very close, remember that a small tilt of the camera might distort your subjects faces, arms and legs. The same also applies for 50mm lenses, yet to a much lesser extend. The two pictures below illustrates this. 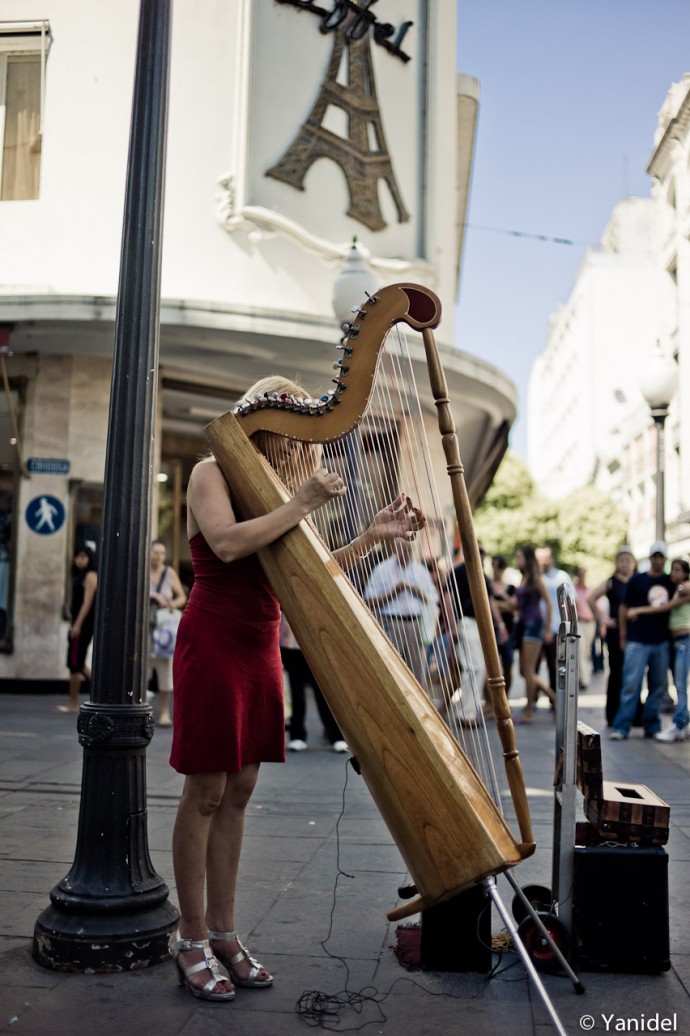 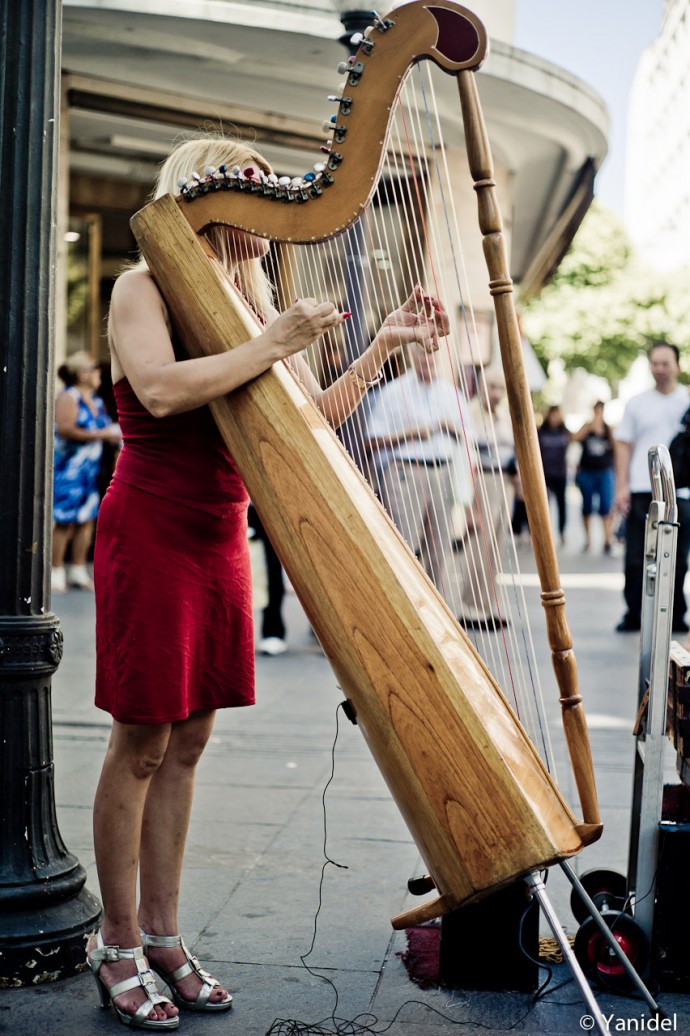 Fast wide angle lenses are more difficult to design, so in general, 35mm lenses will be more expensive than their 50mm equivalent. This is especially true at very large apertures such as F1.4. 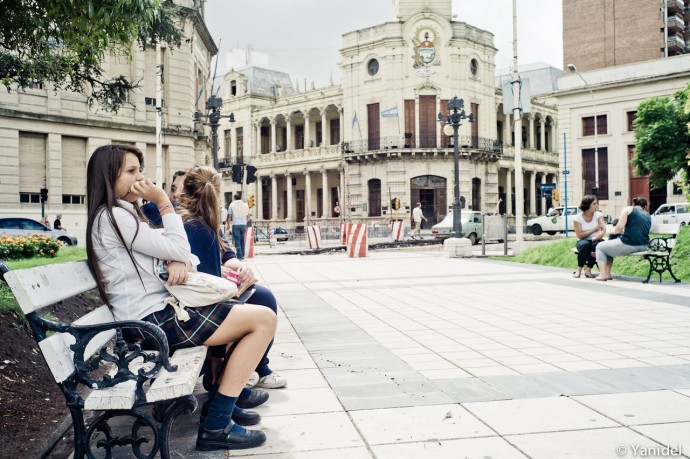 As you can see, there are both advantages and disadvantages to the use of these two focals. None of them stands as better then the other one. Ultimately, it will come down to your shooting style preference and your personality, so ask yourself the following kind of question might  :

– do you like to get very close to people ?
– do you shoot mainly portraits of people in the street ?
– do your prefer large depth of field to blurred backgrounds ?
– do you live in an environment with narrow streets or a lot of wide open space ?
– or even, are you tall ? (it is my case, so mounting a 50mm means a lot of bending and kneeling down which is not always convenient)

If still undecided, you could evidently carry the two focal lengths along. I don’t recommend it though. Indeed, these focal lengths are close in field of view so it will be easier to make the two steps forward or backwards instead of losing time in a lens swap.

As for myself, I started shooting with the 50mm focal length and slowly started to drift towards the 35mm field of view. During this long travel, I simply find it more versatile for the variety of shots and locations I face. Also, I find it is usually easier to get closer to my subjects then to back off. Unless, as depicted in the picture below, backing off results a safer decision … 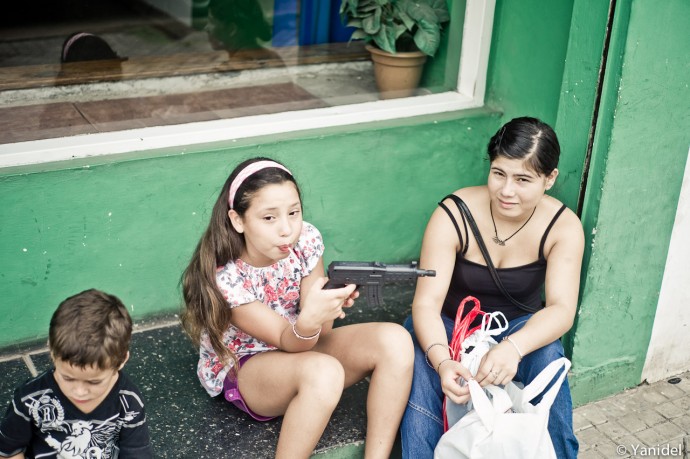