Last week I launched a new column called “Critique-a-shot” where I analyzed on of my pictures in detail. This week, it is time to look at the first two shots submitted by readers.

“Some chocolat on a cold winter’s day.” by Kevin Hall. 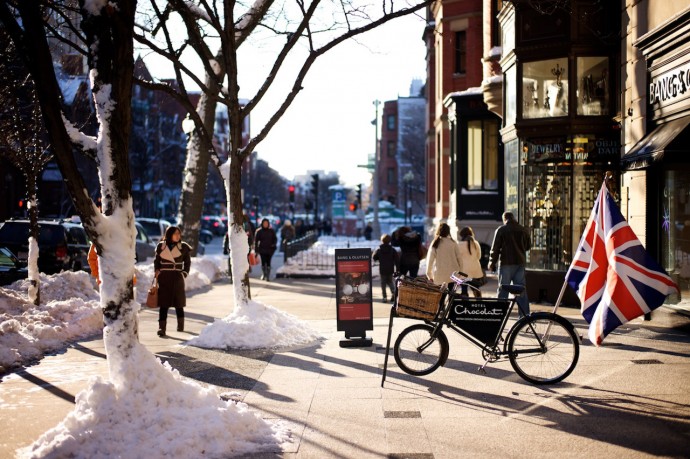 Before I go in depth into the analysis of Kevin’s picture, let me state that this picture is the kind that the web does no justice to. Indeed, it is all about detail and careful observation, which is always difficult on a 13″ inch screen  This picture should be looked at on a large print to fully appreciate it.

Let’s now move on to the three main components of the critique.

Composition
The horizon line is centered yet this is not much of a bother since the bike and the woman on the left are on the same first plane. The tree branches and the buildings on the right create a tunnel effect, accentuated by the depth of the avenue. I love depth in pictures, it often gives a 3 dimensional effect that seems to absorb you in the frame. I think I would have framed slightly higher or got a bit closer to get rid of some of the space below the bike. Kevin probably had a timing issue in this shot as some of his subjects were walking towards him and others away from him, so it certainly was not easy to put all the pieces together in this instance. The woman on the left is in a perfect position, both heels on the ground (always shoot people when both heels hit the ground…), yet unluckily the group of people on the right ended up behind the bike. It bugs me a little since the bike is where Kevin decided to focus on, probably electing it as main element of the picture. Finally, let’s briefly mention the orange man, hidden behind a tree. Though I missed it the first time I looked at the shot, it is there and I’ll come back to it in the last section.

Aesthetics
Kevin used a 50mm lens with at F1.4 on a Leica M9. With the M9’s full format sensor, the depth of field resulted very thin. It shows on the picture as the blur appears already about 1 meter after the bike. I love out of focus areas and I think it is well used in this picture to create a special atmosphere and bringing the attention to the first plane. I would have liked though that the woman in the left were in focus too. Not much of a bother on a computer screen, but it would show in an big enlargement.
The light is gorgeous, a winter sun that stays pretty low all of the day. It creates great diagonal shadows that act as counterpoint to the branches of the tree. The color space is probably desaturated a bit and the amount of contrast is spot on. I like how the red cross of the flag adds some color to the shot. This same red color, is mirrored on the left by the traffic lights.

Meaning / mood / feeling
Hotel Chocolat, Bang & Olufsen, a jewelry store, … this is probably a cozy neighborhood somewhere in the UK. This shot could simply be about an afternoon walk in cold weather with a hot chocolate as deserved prize.  Probably a weekend since the jewelry store is closed (yes, every detail counts). All in all, a great mood that almost has me wish for snow here in Argentina.
What about the orange man … Either Kevin timed his shot on purpose to have the man and his flashy coat hidden partially by the tree, or he wanted to add an element of mystery to the shot. I would go for the first reason, because I am not sure about how a story can be built around this orange man.

Opinion
Overall, this shot has a sound composition though I would have like to have a human on the same plane of focus of the bike. A slight crop of the bottom and left part could be worth a try. The orange man is my main bother but not a significant one, the shot works as it is. The  light and mood are great and convey a feeling of coziness. There is no complex meaning to this scene, just the depiction of life in an English town on a sunny winter day. So all in all, a good street shot that would deserve a large print on one of Kevin’s house wall 😉 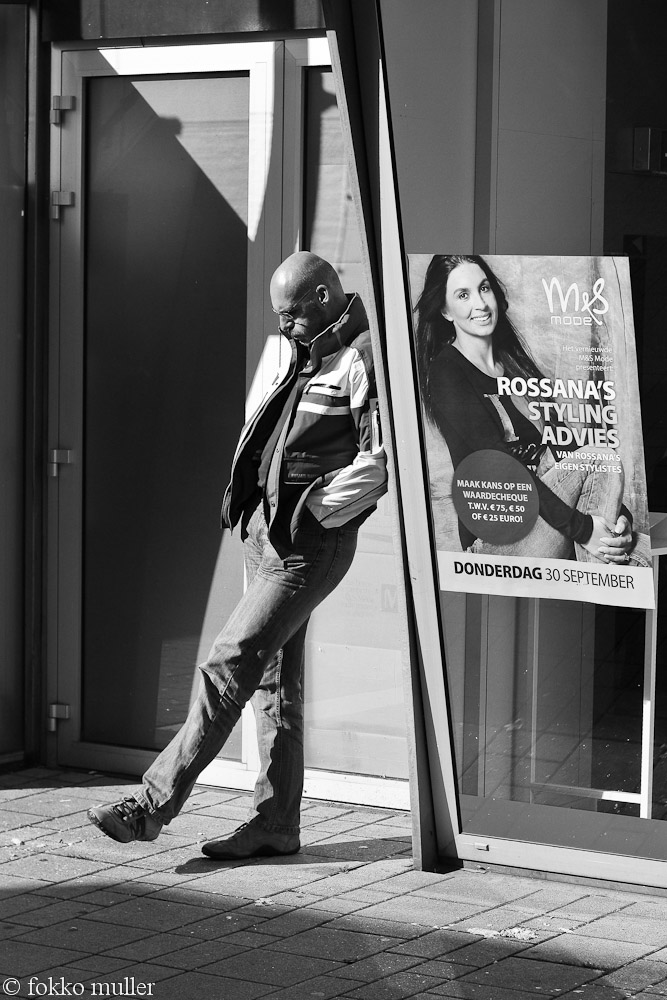 Composition
This shot is a classic B&W street scene. I like the central triangle formed by the man and the building’s structure, it brings some dynamism to the composition. The zones of brightness and shadows are well managed too, creating a contrasty scene and leading the viewer’s attention to the important part of the scene. Also note the smart trompe l’oeil effect as the man seems to rest on the woman’s back. Both of them are also about the same size which adds realism to the effect. Fokko elected to take roughly a 45 degrees angle to the subjects of the picture, probably to avoid being spotted. Yet, the door on the left does not add much to the picture, so I would have liked to see this shot from a bit closer and perpendicular to the main elements. Indeed it is not so easy to understand the man’s state of mind from this distance, is he mad, bored, or … troubled ?

Aesthetics
The picture was taken with a 50mm lens on a 1.5 crop sensor, which translates to a 75mm lens. It shows by the compression of the lines which resulted positive to slightly attenuate the bent building structure. Kevin used a F4.0 aperture which makes sense since there was no distant background and maximal sharpness was needed to allow the ad to be read in detail. The B&W post-processing was well executed since a wide range of tonalities was kept in that contrasty situation. On that same topic, there seems to be no burnt highlights except for a tiny part of the man’s jacket, no big deal. Finally note that the man and woman’s clothing are of different tonalities, as well as the hair (or lack of …), this all allow a clear read of the picture.

Meaning / mood / feeling.
Obviously, one must know Dutch to understand the words written the ads. Yet, a little common sense and the main part of the text can be interpreted as “Styling advice”. And this leads me to my main criticism of the picture which is the message the photographer tried to convey. Is it about the man’s attitude, is it about the ad title, or is it a combination of both ? Maybe the man needs a styling advice, but then his attitude shows more boredom then trouble. It does somewhat work, but the relationship is not very strong. A look of the man towards the ad would probably have clarified the message. Another reading could be the contrast between the smile of the woman and the boredom of the man, “life is always easier in magazine”.

Opinion
Long lenses are great to avoid being spotted but in this case, it would have been worth to risk it to have a closer and more centric composition with a wider lens. Not that the composition does not work this way, it is well constructed and supported by a great B&W post processing. Yet it is taken from a bit too far from the action to have a good read on the man’s attitude. This leaves room to several interpretation of the scene which might result confusing for the viewer. This could very well by Fokko’s intend, give hints and let you create your own story around it. This is also what street photography is about.

You can discover more of Fokko’s pictures by following this link.

Thanks to Kevin and Fokko for submitting their picture. Remember that this is just an opinion and in the end your own is the one that matters the most !

Interest to have a picture of yours in go through this critique ? Please read the instruction here.