As some of you might remember, last year's month of December was dedicated to readers' pictures. I believe many of you enjoyed discovering the work of fellow street photographers so here is a new series called Sho(r)t Stories. I plan to make it a weekly or bi-weekly feature on this blog and it should run all year long. The idea behind Sho(r)t Story is to tell everything about one of your favourite picture. Not only what can be interpreted by solely looking at the picture, but also its context, some technical and gear considerations and, of course, information about the photographer and his work.

Let's therefore discover the first picture of this new series, a work by Aaron Greenman from Brussels, Belgium. 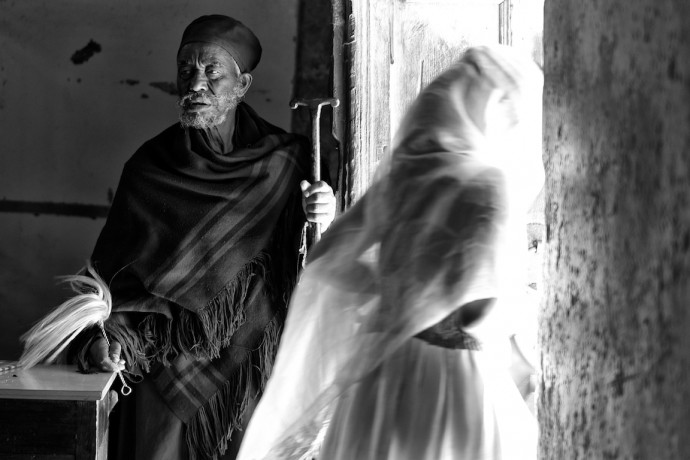 What is the Sho(r)t Story?
In March 2012, I found myself on assignment in the center of Islam, Christianity and Judaism – the old city of Jerusalem. Although I'm what anyone would call a "non-believer," the setting was still nevertheless inspiring, with a swirl of light, color, sounds and smells providing a glimpse into a long and complicated history. During my time there, I returned repeatedly to the Coptic Orthodox Patriarchate set in a small corner of the Church of the Holy Sepulchre. Having lived in East Africa for years, it felt strangely like home – the Ethiopian priests guarded to too much attention from outsiders, but gentle in their disposition. While the main church is also one of the centers of religious tourism in the city, the Coptic galleries are logistically difficult for the larger tour groups to navigate, and thus their charms are better preserved. The Coptic presence has been there since the 4th century, and the mix of narrow passageways, dim interior lighting mixed with patches of streaming sunlight, and simply dressed priests combine to create a truly spiritual environment.
Why is this picture one of your favorites ?
I enjoy looking at this photograph because of its simplicity, its rhythm, and because it's open to interpretation. In many ways it reflects my photography ethos and the name of my website – AcuityColorGrain. There is a nice contrast between the dark hues of the man at the door, and the white robe of the departing woman, who takes on an almost ephemeral quality when mixed with the streaming sunlight. There is also a nice mirroring between the man's horsehair  fly swatter and the flow of the woman's shawl. It's an image that reminds me of the maxim "The God of Small Things"; in a place of intense formal religion, sublime beauty appears in the ordinary details.
Which equipment did you use, and any technical considerations ?
Leica M8 with 50mm Summilux ASPH at f/1.4. With little interior light and the transition to intense sunlight at the exit, it was difficult to capture the man with sufficient sharpness and definition and at the same time not blow out too much of the woman's detail. In the end, though, the limitations of the M8's dynamic range to me created a more powerful image. The sunlight, and the woman's move toward it, become metaphorical.
Tell us about you and your photography ?
I have been an active photographer for 25 years, and a dedicated rangefinder shooter for the past five. With a rangefinder there is just something to the process of seeing the scene which appeals to me, a consistency in approach that change with neither lenses nor focal point. Having lived and worked in Africa, India, and the Far East, I tend to feel more comfortable in and attracted to the "developing world" and its aesthetics.

If you would like to participate to this new series, send me an email at yanidel@fastmail.fm with the following information :
– your name and location
– one of your favorite picture  (max width of 1280 pixels, you obviously retain all the pictures copyright)
– answers to the above questions.
– any links to your work (website, Flickr, Facebook, …)