It is already time for us to leave Japan after two weeks that went by so quickly. As usual, here are a few thoughts about  our host country and street shooting there.

Discovering the city : The first hours spent in Tokyo bring a feeling of being on another planet. Suddenly, you lose all your marks since Latin alphabet is globally absent. Simple tasks such as orientating yourself of ordering food become complex and you find yourself staring at the metro network plan like an ancient papyrus. Yet soon, you adapt to the new environment and start to understand the many pecularities of the Japanese life style. Somehow, I had expected Tokyo to be similar to Hong Kong in terms of crowds and frenziness. Yet Tokyo is actually much quieter and except for a few spots like Shibuya or Shinjuku, you actually get the feeling to be in a smaller town. This is probably due to the fact that Tokyo does not really have a downtown but is made of several neighborhoods with their own characteristics. 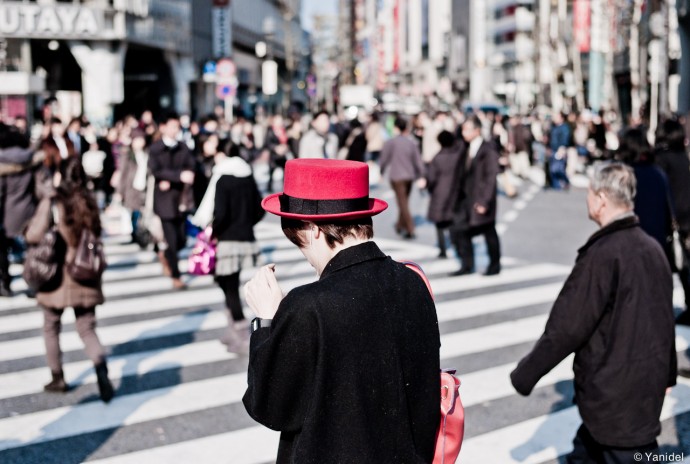 Follow the flow of the crowd at famous Shibuya crossroad

People : I suppose it is difficult to find anywhere in the world people so polite and respectful. I actually felt bad in some instances about shooting in the face of people that would never say anything out of respect to the visitor. And odd feeling.  I had very few negative reactions but did notice a big gap between generations. Indeed, older people showed mostly suspicion or indifference while younger ones were actually happy to be shot in most cases. I could not believe that some people even thanked me for taking their picture. The main challenge here was to be faster than the traditional “V” sign that automatically pops up as you raised your camera. A characteristic that always made me smile while observing (or shooting) Japanese tourists in Paris.

I was fast to focus, yet you cannot beat a Japanese at the V sign game. 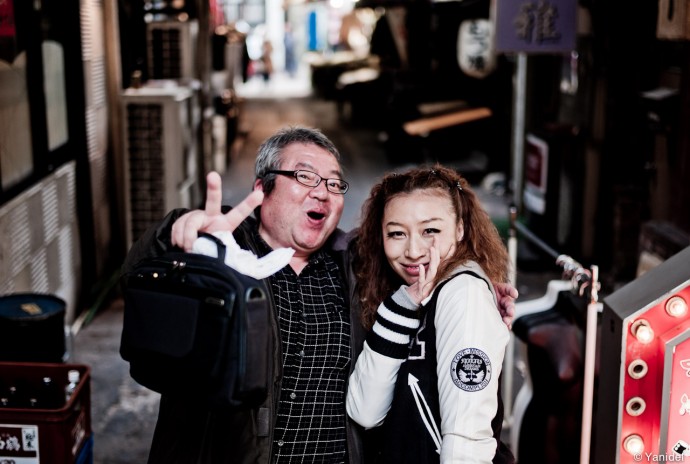 And even after a few Sakes, they V sign faster then Billy the Kid.

Street photography :  Unlike Hong Kong, I felt that my 46mm field of view (M8 + 35mm Lux Asph) was actually quite effective to cover the various settings of Tokyo. As said above, some areas can get really crowded, but you’ll also discover many places such as parks, temples and residential neighborhoods where a 50mm will be just right. 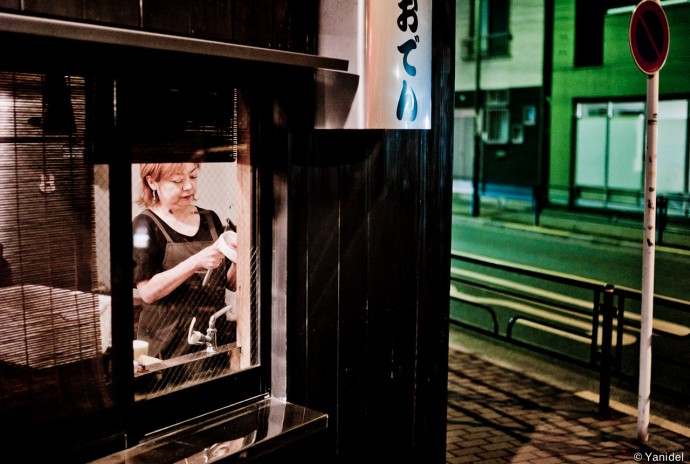 A night scene on a quiet street in Ueno.

Another interesting location was too shoot in the underground system since it really is a big part of Tokyoites’ life. I was amazed to see that a high majority of people slept during the commute time, apparently exhausted by their studies or work days. 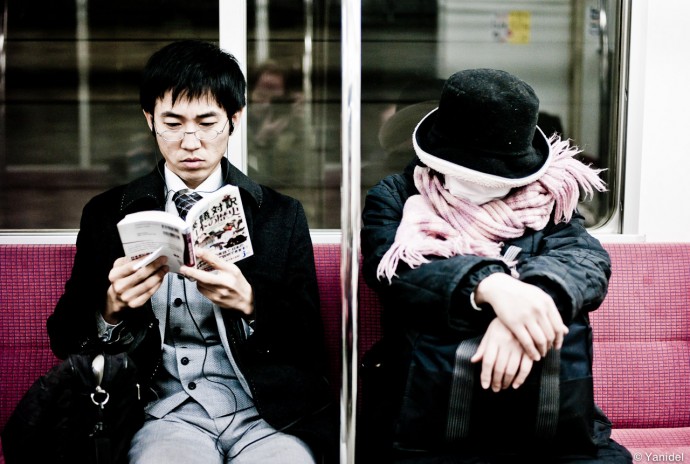 Let’s also mention Electric city and the Manga neighborhoods which were great for street photography, not only because of the people hanging around there, but also due to the colorful and flashy settings. 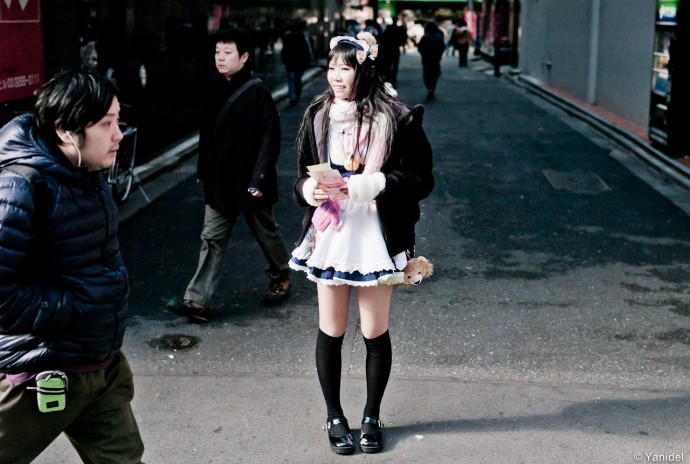 All in all, as I reviewed the shots I took during our two weeks stay , it is probably my less homogeneous work in a country since the beginning of our trip. I struggled to construct a personal vision of the city. But in the end, it maybe just depicts the nature of Tokyo in the eyes of a Westerner; heteroclite and full of pecularities.

A word of warning : We found Tokyo to be outrageously expensive, probably due to the strong yen. It was difficult to find a hotel room for less than US$60 (and this is with shared toilets…) and we ended up eating many times at convenience stores to somewhat keep control of our spendings. This being said, this was actually the only country we visited that gave some discounts to foreigners exclusively. Hospitality the Japanese way ! 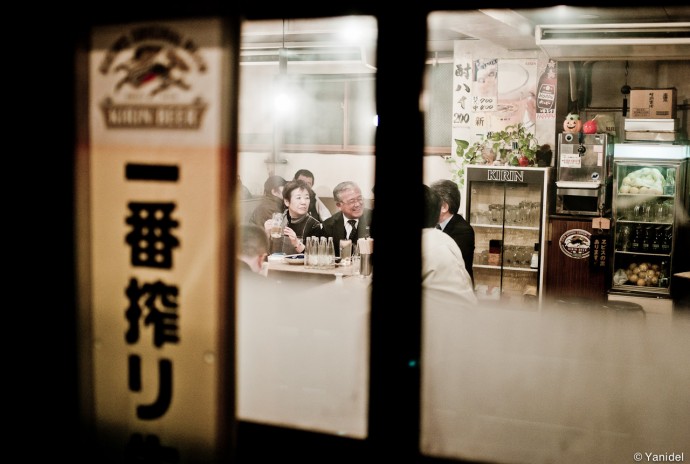 Backpackers staring through a restaurant’s windows after some noodles at 7 Eleven.

The one million dollar question : Why do Tokyo city maps almost never have the North pointing up ? (or … have you ever tried to read a map in Japanese with you head pointing down?). 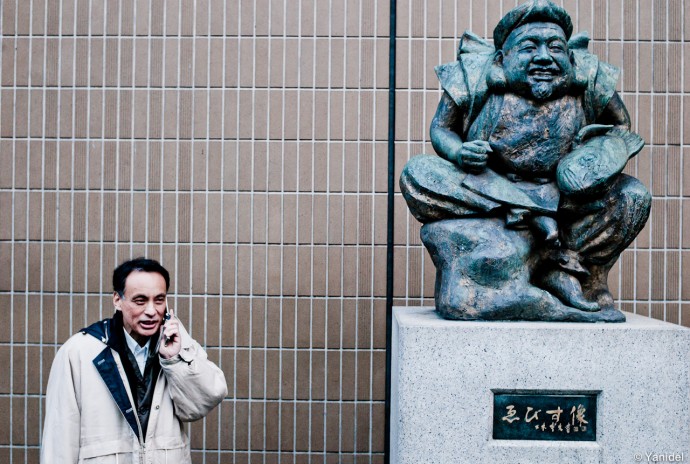