For this week column, let’s head back to Europe and analyze work from photographers located in Germany and Austria. 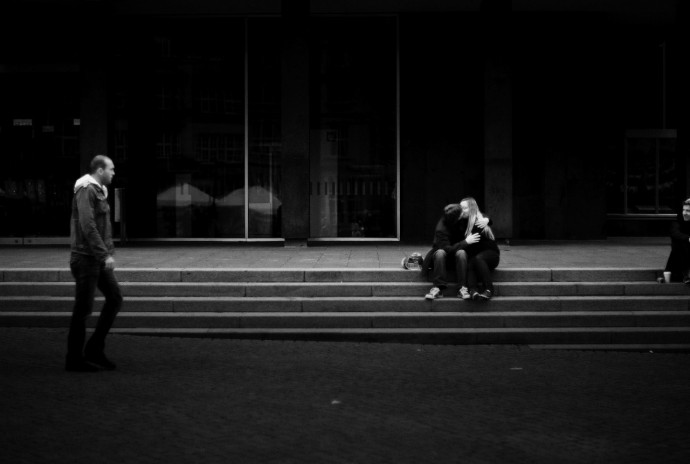 Compostion
Konstantin’s picture has a panoramic structure as the key elements all happen within a thin central band. A crop would definitely work here though I know most people like to remain with the original field of view of their picture, which is fine. There are three key elements in that picture, a man walking, a couple kissing and another man sitting on their right. I like how they are positioned though I would have preferred to have the man sitting on the right fully included in the field of view. Indeed, the main subject is the couple, yet the man being half cut distracts a bit away from them. Indeed I couldn’t help wondering why he was cut out. I think Konstantin should have included entirely in the frame as he is an essential to its reading. Konstantin took the shot with a rangefinder so  perhaps his initial intent was not to include that man as he is positioned roughly in the area corresponding to the camera’s safety factor. Anyways, that man still makes the picture more interesting, so it is good to have at least a bit of him. As for the couple, great timing here, the kiss is just perfect. Note the great interaction between the subjects as the two men look towards the couple, bringing further the attention towards them. Finally, remember to watch out for your reflection in the windows when you shoot … I am not sure it is Konstantin that I see in the back, but it could be 😉

Aesthetics
According to the Exif data, the shot was taken wide open. It does show as the foreground is slightly blurred as well as the man on the left. When I face situations like this one with a wall behind my main subjects, I usually tend to stop down my lens for a longer depth of field. Indeed, there will be no background blur so there is no real advantage to shoot with a large aperture. Konstantin might have chosen the large aperture for the special look it provides yet I usually find that that special looks are not enough to offset the problem of the thin depth of field it might bring to a shot. In this case, the man on the left is slightly blurred, not because of a low shutter speed but because it is not within the acceptable focus line. Not a big deal but something to keep in mind when you shoot wide open. Focus is spot on on the two lovers, good job since it is never easy to focus and shoot quickly with a rangefinder at that kind of aperture.
Konstantin used a Silver efex for the post processing which is very high contrast. Here it seems a question of preferences, but I find it a bit heavy on the dark. Indeed the shot has few tonalities and large pans of black almost give it an oppressive feel. Is it adecuate for a topic as light as love ? I guess Konstantin wanted to fully isolate his subjects from the surrounding to have the viewer focus on the three key elements. It does work doing so but a bit to the expense of the picture’s finesse. Another positive aspect of Konstantin’s processing is how the frame of the windows in the background appear to break a bit the horizontal composition. It also adds a mystery touch to the picture.  Lastly, remember that both heels should preferrably be on the ground when you shoot walking subjects, it always improves the picture when the legs form a perfect triangle and give a clear reading on the person’s whereabouts.

Meaning / mood / feeling
This is a light and easy scene to read. Two lovers kiss under the eyes of passer-bys. One of two men almost has an envious look while the other is laughing. It shows some of the many reaction of humankind towards love. There is no ambiguity on the meaning of this shot, just a pleasant urban scene about love. Sometimes the simplest things are the best.

Opinion.
I would have really liked to have the man on the right fully included in the frame to clearly close that love triangle. I also think the post processing is a bit too strong on the darks. This apart, timing was almost perfect, the message is clear and Konstantin triggered at the perfect time. A decisive moment shot I would say. I would suggest Konstantin to try a panoramic version of this picture, it would probably look great printed this way.

To discover more about Konstantin’s photography (as well as several other interesting centers of interest), click here for imperfiction.com.

As an introductory comment, Axel asked me whether pictures taken within museum count as street photography ? The answer is in my opinion yes, provided there is an interaction between a human element and the museum setting. 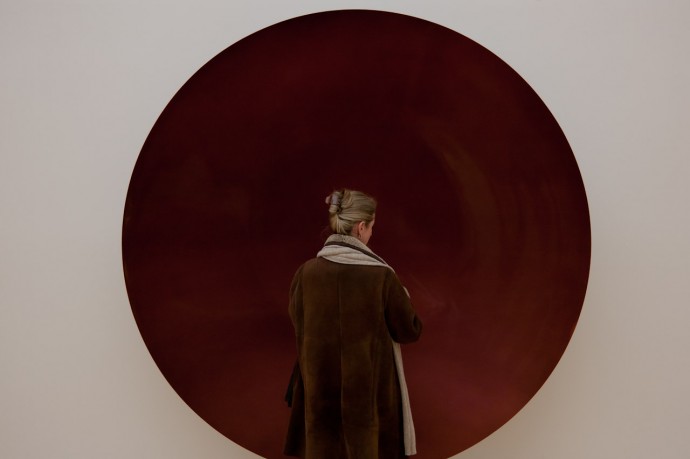 Composition
Axel’s topic is quite unusual and allowed for creative framing. Round shapes are obviously not always easy to include in a rectangular frame of view. By centering the artwork, I think Axel took a good decision as it creates equidistant lines to the border of the frame. I wonder though if it would not have been even better to include the full circle in the frame. Indeed by leaving the lower part out, it almost feels like Axel did not go the full way of his original creative intend. As for the woman’s position, it respects the geometry of the picture since she located in the center of the picture. Note that her head is the center point of the circle, very smart choice from Axel here.

Aesthetics.
The main problem when shooting artwork in street photography is to avoid making it the key aesthetic element of your picture. Indeed, it sometimes feels like the photographer relies on the skill of an other artist to make its picture interesting. In Axel’s picture I don’t think it is the case since the woman and the circle create an association where both subjects are of equal importance. At the same time, both elements seem to melt in each other since they use roughly the same color tones. I am not expert in colors, but I feel the red and brown tones in this picture bring a feeling of coziness, probably emphasized by the coat of the woman. I also like a lot how the blond hair of the woman brings contrast to the red and brown tones. Same can be said of her scarf which brings a different shape, almost like a fluid flowing from the circle’s center. I also liked the detail in the woman’s hair as well as her square shaped earring, I think it might tell about her personality.  Finally, I think there is a slight under exposure on the shot. I would suggest Axel to increase it by a half to a full stop to bring some more pop to the picture.

Meaning / mood / feeling.
This is a very difficult shot to interpret meaning wise. The color of the circle reminds me some of Rothko’s work, which was known to spend hours in front of his paintings in contemplation. Did Axel follow this line of idea ? There is no element to sustain it but that leads me to the main issue with that picture which is the woman’s behavior. What is she doing ? I looked at this picture for a long time and could not get a clear reading on her expression and attitude. Is she lost in her thoughts ? Is she looking at the paint texture ? Has she a hard time understanding the meaning of the painting ? Several interpretations can be given to that scene yet none seems more evident than the others. Evidently, the choice can be left to the viewer. Yet I usually like when the meaning of a picture is pretty straight forward, even if it requires a very meticulous read of the picture.

Opinion
In terms of composition and aesthetics, I think Axel did a great job. Add a bit more exposure and this will be a very pleasant picture to look at. I wonder how it would have looked framed slightly wider, encompassing the full circle and maybe even part of her legs. My main regret is that Axel wasn’t able to record more precisely the woman’s state of mind or behavior. The goal of street photography is not to depict the truth, it is impossible, yet to give enough elements to the viewer to come up with his own interpretation. Here I am left in between, I could not come up with my own story. I’d love to know though what was Axel’s interpretation of the woman’s behavior.

Click here to discover more about life in Vienna and Axel’s work.