As you stroll along the streets of a city and shoot strangers, every once in a while people will get angry at you for taking their picture. It is understandable, street photography is quite an obtrusive act towards your fellow citizens. You scrutinize them, interpret their behavior and decide whether their doings are worthy to be recorded or not. The resulting array of reactions is therefore very diverse, from total indifference to anger, even though smile is still the most common answer you will get. Yet, whatever the reaction, consider it as a legitimate part of street photography which must be dealt with. Indeed, whenever a person portrayed is mad at you, remember that you provoked this reaction.

There are many reasons why a subject might get mad. It ranges from having a bad day at work, not feeling attractive, paranoia, being caught in an embarrassing situation or fear to appear in the press or on the web. It will thus be very difficult to determine what is the root cause of the displeasure and to find the correct way to ease his/her wrath.  Indeed, every subject is different, there is no trick that will suddenly turn your subjects into docile and understanding mates.

One of the main issue with taken pictures of strangers is that street photography is quite unknown to many. Indeed many people just don’t understand why you are taking their picture and they become suspicious on your intention straight away. The dialog below illustrates the interaction you could very well face when taking a shot.

While obviously a bit satiric and exaggerated, this dialog incorporates a lot of the common reactions you might get by angry people.  So, apart from running for your life, what is the best way to deal with such situation ?

– Act normal, there is nothing wrong about taking pictures in the street. Be confident and give the impression that you know what you are doing.

– Smile, behave friendly. If you act like a spy or in a sneaky way , you’ll legitimate even more his angriness. A smile always shows good intention and while it might not ease the anger, it will not escalade it further.

– Move on. I usually break the eye contact and move on, sometimes with a short apology. Most people will just give up as they soon realize it is just a picture and probably not worthy of a big argument. Angry people have usually more then one reason to be mad, it is not just about you taking their picture, so if you decide to engage conversation, it will often be a downward spiral.  Also arguing about whether what you are doing is legal or not is useless, mad people either don’t care or  tend to assimilate “celebrities’s lawsuits versus people magazines” with common law. Indeed, there is a lot of misinformation and confusion on privacy and rights of image law in general. Moreover I strongly doubt that you’ll have be able to convince an angry stranger that you know the law better then he does. So again, move on and hunt for the next shot.

I know this is tough as we all like to defend our rights, but every single time I engaged conversation with an angry person, it pretty much got worse. So focus on your photography, arguing will just make you more anxious and distract you from what is happening in the street.

As for Argentina, I have yet to face an angry person. A vast majority of people are very friendly and don’t mind being photographed. I would even say that many enjoy it, which makes it quite a great place for street photography. 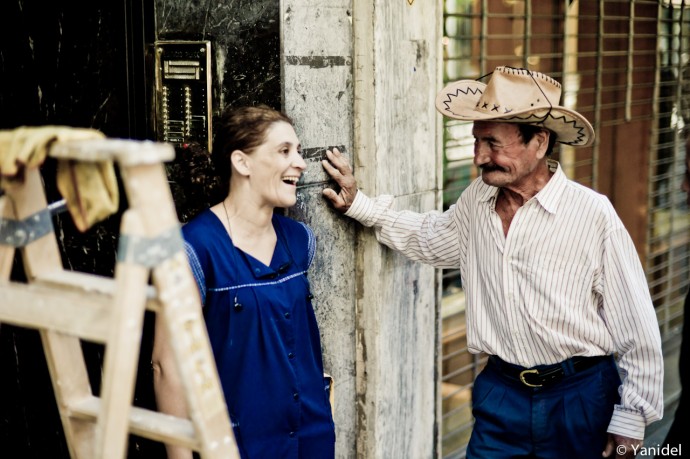