This week we disover the story of this shot taken in St. Petersburg by Eero Lehtonen from Finland.

If you'd like to participate in the future, instructions on how to submit a shot are located at the end of the this article. 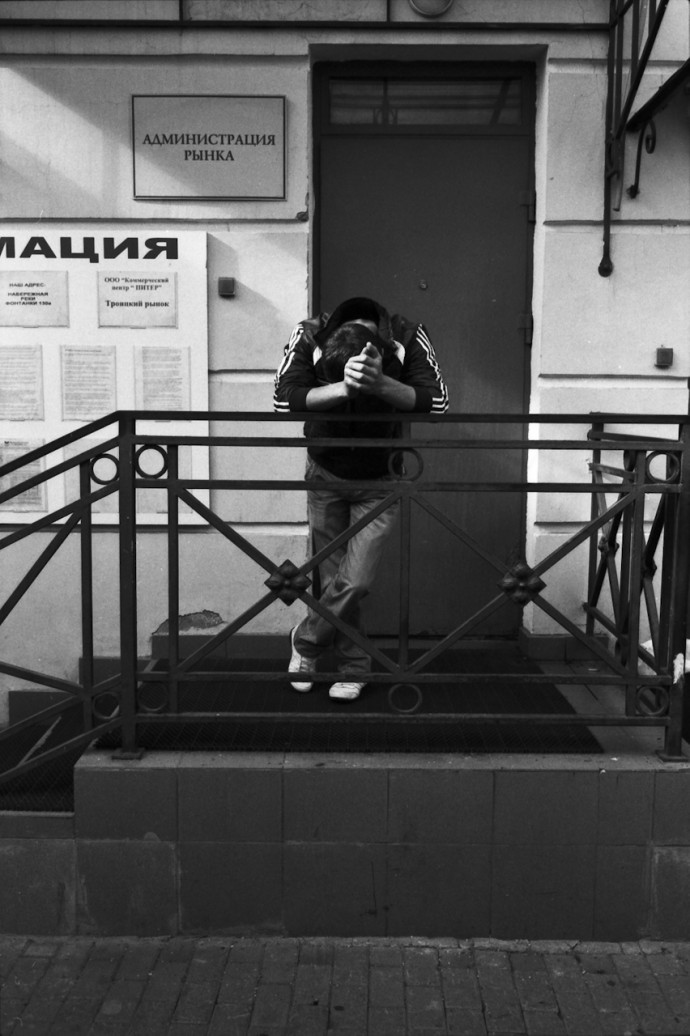 What is the Sho(r)t Story?

This one was taken August 2011 when I was visiting St. Petersburg with my girlfriend and my parents. If I recall correct we were coming from a restaurant and on our way to the nearby cemetery that has become a bit of an attraction since lot of historical person have been buried there. In particular we wanted to see Tschaikovskys memorial. We stoped at one alley to check the map and this guy steped outside to have a break from something. I regocnised the almost praying like posture of his and luckily had a nice beam of light hitting him. Snap and here it is.
Why is this one of your favorite pictures ?
For once I think I've managed to combine graphical and emotional elements well into one frame. I also like the beam like light on the subject that really makes the sitsuation look like he's praying. Even though he just came out for a smoke. It's just one of those frames that hit everything right for my liking.
Which equipment did you use, and any technical considerations?
To be really honest I think this could have been made with any camera . . . anyhow. This one was taken with Leica CL (a camera I regret selling now a days) and 35mm Leica Summaron (the M2 nongogles version). Film used was Rollei Retro 400S that I bought in meters. Film was developed in TMax developer (it might not be the best and most noice free developer but it's fast and readily available). After the frame was scanned straight from the negative with Epson Perfection V330 Photo basic flatbed scanner that does decent job with Silverlight software out of B&W negatives. I really still strugle scanning slides. That's why I like to choose digital for color work and play with film mostly in B&W side of my photography.
Tell us about you and your photography?
These days I am a full day food and wine nut and study restaurant business. Photography alongside cooking is my creative outlet. I started my photography hobby somewhere early 2000's. Think it was 2001. I started straight a way with film photography using my dads old Canon film bodies. First I was more into landscapes even though I already liked a good photo taken of a person. After a while I bought my first own camera a digital one and started experimenting more with my photography. I got more and more and more interested in social documentary and street photography. This blog was one of the key factors that got me hooked on street work. So when I saw another readers picture chain coming up I couldn't resist.
To discover more of Eero's pictures : http://www.flickr.com/photos/eero-b1/