Holidays are over, time to resume with the Sho(r)t Stories series. Let's do so by visiting London and discover all about this shot by Gary Perlmutter. 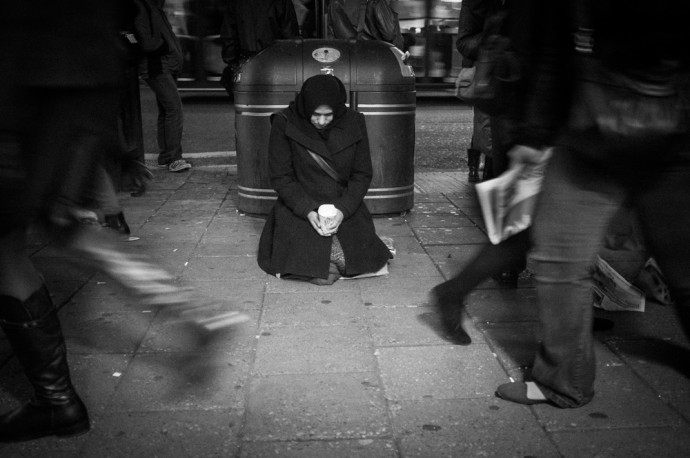 What is the short story?
I often travel into London to spend some time following my passion of street photography. Last month I was on Tottenham Court Road, just by the tube station, when I noticed this woman sitting on the floor clasping a cup hoping to collect money. What was unusual was that instead of placing herself against a wall as most beggars do, she had deliberately sat down in the middle of the pavement during the rush hour! I spent some time watching her and was amazed that no one bumped into or fell over her. Most people just ignored or didn't see her. However a few did drop money into her cup. The only time she stood up was to answer her mobile phone!
Why is this picture one of your favourites?
Most of the time my street photos just capture a moment in time that is here one second and gone the next. In this case I knew the women was likely to be there a while, although no idea how long. In my head the picture I wanted to capture was to show how to most people she was invisible, with people preoccupied in rushing home from a hard days work. I knew that I wanted to achieve a low viewpoint and also show the people rushing by as a blur. So I anticipated that a shutter speed of 1/30 sec would gibe me the blur. (which it did). I sat down opposite her hoping she wouldn't notice me and took several shots. Only this one shown really worked,as others had legs in front of her, or missed people completely. I had managed to capture exactly the image I had preconceived in my head!
Which equipment did you use?
I used my Fuji X100, the 35mm equivalent lens was the perfect focal length thankfully. As stated above a used a fairly slow shutter speed to blur the people walking past.
Tell us about you and your photography?
I ma a professional wedding and portrait photographer, who loves street photography which I do on my days off. I live just outside London, England. I have been a photographer since leaving school back in the 70's. Always lusted after Leica's and just bought myself an M8 at long last!
Discover more about Gary's work at :
My website: www.gazonthestreet.com
Flickr: http://www.flickr.com/photos/gp_photography/
Twitter: @gazonthestreet
If you would like to participate to this series, send me an email at yanidel@fastmail.fm with the following information :
– your name and location
– title of photograph (if any + equipment used)
– one of your favorite picture  (max width of 1280 pixels, you obviously retain all the pictures copyright)
– answers to the above questions .
– any links to your work (website, Flickr, Facebook, …)