Today's picture is a scene from Amsterdam in the Netherlands taken by Konstantin Mihov. 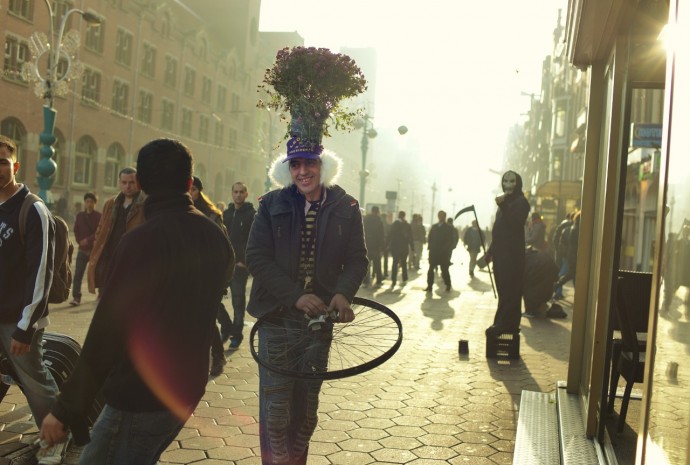 This is what Konstantin wrote about his picture :

I was walking with a friend around the main street leading from the train station to the city centre and just about 3 minutes before the picture, a bird pooped on my shoulder so we went into a cafe to ask for a napkin. As soon as we came out, I noticed this guy walking towards the sun. He looked very strange with that pot of flowers on his head and the bike rim in his hand and I knew I should be taking a picture of him but he had already gone by when I realized I could take a shot. I still tried and I am so glad I did because the moment I tried, he turned in my direction and I snapped the picture without much thought on composition or lighting. In the end I really LOVED the quality of the light – the air had a certain softness and foggy quality which created this almost surreal background. And then when I examined the picture later, I noticed the strange figure dressed in black, with a scythe and standing on a podium. I have no answers but only questions the more I looked at the picture: why was the guy carrying a pot of flowers, why was he carrying it on his head, what is holding a bike rim, why is he smiling, why did he turn, why is the guy with the scythe there, why is he looking at us? I don't know but I like looking at it again and again trying to figure something out.

I probably wish I had included his legs. And I did try the picture in black-and-white as well but it didn't work the same way for me as this warm-colored variation. A story around my trip to Amsterdam with several more pictures can be found here: http://imperfiction.com/blog/2011/11/9/living-alone-and-travelling-in-amsterdam.html