When Leica launched their compact APS-C sensor X1 to the market over a year ago, I was originally thrilled to discover what could be a great take anywhere camera for street photography. The F2.8 lens was a bit slow to my taste, not so much for low light as the high ISO performance was excellent, but for these shots where background separation was needed.  Yet, I was delighted to see that Leica had designed a camera with both aperture and speed dials easily accessible on top of the camera. Indeed when shooting in manual mode, these parameters must be at the touch of your fingers, leaving aside the need to enter a menu system or activate through complicated buttons combination. Also, I thought the external optical viewfinder to be absolutely wonderful in the spirit of the Leica M’s viewfinders.

In all these regards, the X1 seemed a camera better suited for street photography that the Sigma DP2 I had been using as complement to my M9. Nevertheless, I was utterly disappointed by the manual focus capability of the X1 in the original firmware. Many street photographers work exclusively in manual focus, reason why Leica’s simple and fast manual focus capability had been a long time favorite. So I  thought that the X1 manual focus implementation was simply unusable for street photography unless one zone focused permanently on the same distance. If one shot mainly with extensive depth of fields, this could probably be fine, yet for photogs that shoot mostly wide open as  I do, the focus distance must be changed on a shot by shot basis. Therefore the need for a very simple and swift way to change the focus distance. Not that it was impossible to perform on the X1, but it was done through the LCD and by rotating the thumb wheel on the back of the camera. That thumb wheel has a very long focus throw so it could take you a few seconds to go from one focus position to the other. In two words, manual focus a was slow, cumbersome and one could never know where it was set unless looking at the screen (or having an excellent memory). That made if basically unusable for any street shot other than people sitting still on a terrace.

Come version 2.0 of the firmware released earlier this week that fixes most of this issues. The ensuing is therefore, is the X1 finally the perfect compact camera for street photography ? In many ways, and lens speed apart, yes it is. Manual focus distance can apparently set much faster so a quick glance at the LCD together with a slight move of the thumb wheel and you are set. The distance scale that appears on the LCD is now more detailed, with more traditional distance marks which makes it comparable to the Leica M lens markings. Finally Leica implemented a depth of field length indicator, which is also very handy (though with a F2.8 lens on APS-C sensor, everything get pretty much in focus after a few meters), and a resume to last focus position on power on. All in all, this firmware update seems to take the most out of the current design and make it a camera perfectly usable for street photography.

Nevertheless, I can’t help wonder why Leica did not get it right from the start ? Leica’s traditional photography fields have always been reportage and street photography, so their customer’s requirement should be well known and understood. Manual focus is one of these main requirements, and since the X1 was also aimed at street photographers, I am amazed that camera with a slow auto-focus and terrible manual focus capability was launched to market. More frustrating is the fact that a company such as Sigma had shown the way with a very easy and effective way to manage manual focus by designing a small dial with distance markings. No need to look at the LCD and a way to operate it which made it feel like a small Leica M (though crippled by many quirks of its own). I had discussed all of this with a Leica representative at the Paris Photo Fair last year and he understood the concerns. That was probably a story that Leica heard from many of its users so kudos to them for reacting and coming up with a firmware that fixes the issue as much as possible within the current design. I believe that the X1 is overall now a better alternative than the DP2, as a compact street shooter (cash considerations apart obviously). Yet until Leica finds a way to operate manual focus through a dial or a ring with distance markings, I’ll remain loyal to my DP2 as backup camera. I just don’t have time to look at the LCD while shooting and in the end, this is my main criteria as a customer.  I’ll have to wait to upgrade, hoping that a X2, or DP3, will finally be that small CL type of camera we have all been dreaming about.

Shot below : Leica X1 launch, from full of hopes to disappointment. 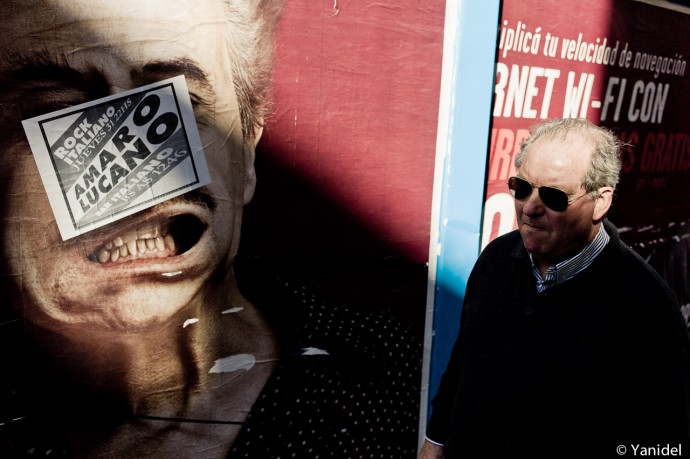