This week let’s have a look at two pictures taken in two very photogenic cities of Europe : Amsterdam and my dear Paris. 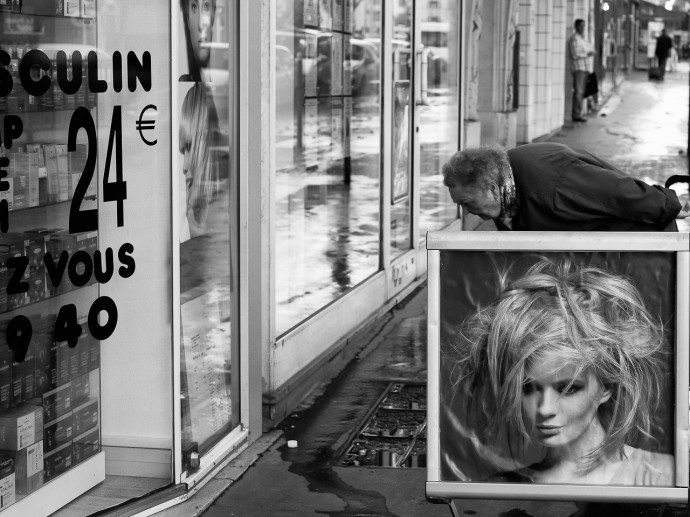 Composition
Looking at the picture for the first time, I saw straight away that the dimensions were not the usual 24 x 36 one. In most case, it means that it is either a 4/3rd camera or it has been cropped. In the case of Stig’s shot, the EXIF data tells it was taken with a Sony A900 which is a full format DSLR. This basically means that Stig made some cropping in post-processing to adjust his composition. Some cropping is fine, but I personally prefer that whatever the crop, it keeps the original ratio. Not only will give more consistency to a series, but it will also help if you have plan to include within a book. This apart, the picture is well composed. It is cut in half diagonally and Stig made sure to include the end of the street, which gives a good impression of depth. The frames of the window as well as the poster girl does give a nice graphical composition. The elder woman is well positioned and it would have been difficult to take a better angle. Since Stig seems to have cropped his pictures, I would cut a bit of the poster frame on the right to leave out the very thin line of empty space. It would have also taken care of the very thin black line on the top right of the picture. These are details, but perfection is often in details. As for the very left part of the pictures, it is challenging to find a perfect cut of the words on the window without altering the rest of the frame. Note finally that the picture is slightly bent to the right, here again it could easily be remediated in post-processing.

Aesthetics
Stig chose a black and white conversion that fits well this picture. Some highlights are slightly burnt but it would be difficult to avoid in such a shot. Overall the medium contrast works great in this picture. According to the EXIF data, Stig used a 50mm lens (or had a zoom positioned at that focal length). This is a classic focal lens and many street photographers strolled around in Paris with that focal over the last century. The picture is extremely sharp, prowess due to the high pixel count of the A900 and a good lens. Good choice also on the aperture since by setting his lens at F5.0, Stig ensured great sharpness on the whole field, but still allowed some blur to give some Parisian lyric mood in the background. My main advice on this shot would be to give a slight localized exposure increase on the elder woman face. It is slightly too dark and does not allow to have a good read on her expression.

Meaning / Mood / Feeling
This is a type of shot that I like to call “Trompe l’oeil”. In other words, it plays with your vision by providing key elements in unusual dimensions, perspectives or types of support. Stig did a smart juxtaposition of the poster girl with the elder woman, both in terms of age, but also quantity of hair. This shot is probably about youth and decay. Another secondary message could be about the cost of living in Paris. Indeed the woman has to bend to have a look at the prices and there is almost a feel of scare in her eyes. At the same time, the poster located above the price shows a woman that seems to be laughing.

Opinion
Great composition and a good processing that could might be slightly be improved by recovering some of the burnt highlights. The message is clear and funny with a strong humanist touch. All in all, this is a classic Parisian street photography shot. A little exposure increase on the woman’s face together with a slightly tighter crop on the right and will be perfect. Congratulations.

Discover more of Stig’s photography by following this link. 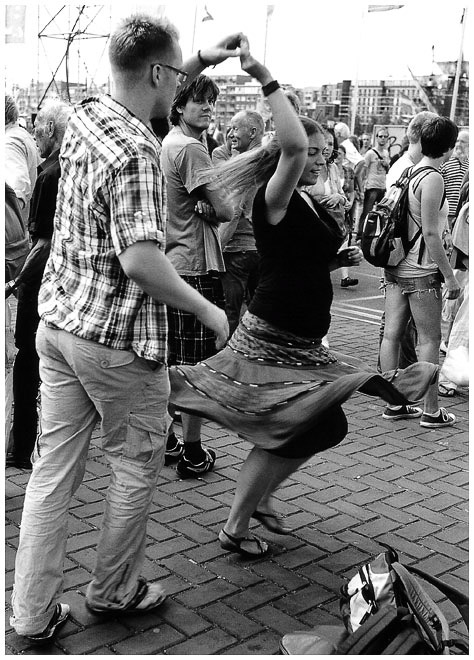 First let me state that it has been a difficult shot to critique. On one side, there is something very likeable about it at first sight; there is movement, joy and a great B&W development. On the other side, mainly details soon jumped to my eyes that bothered me a lot. So let’s go through my systematic analysis and see what comes out of it.

Composition
Charles used a Leica M6 with a 35mm lens. Taking vertical shots with a 35mm lens from close distance brings up a big difficult which is to keep the vertical lines right.They do not always have to be perfectly straight yet in this case, both the boats’ masts andbackground buildings lean to the right. This is further exaggerated by the body position of the male dancer that also points in the same direction. This perfectly illustrates how our vision is often influenced by the first plane of a shot. In this case, the framing should have been done by keeping an eye on the lines of building in the back. This being said, Charles did a good job with the position of the camera by allowing a good feel of the setting of the action. We can clearly see that it was taken within a city harbour and probably at an event. I like the central position of the girl, she is the star of the picture. Too bad a guy succeed to stick his head in between of the arms of our happy dancers, but I’ll come back to it. I’ll also come back to the backpack laying the first plane, yet I think it should either have been excluded from the picture (not easy in this composition) or fully included. Same applies to the feet of the dancer.

Aesthetics
This shot shows two things that I personally think ruin many 21st century photography. Backpacks and sneakers (or basketball shoes). They are not photogenic at all and it will completely take the glamour out of a shot. In Charle’s pictures we have 2 backpacks and two or three suspicious styles of shoes. I am obviously joking a bit, yet is shows one of the dilemna of street photography in some scenes. Do you favour its documentary function or do you want it aesthetically pleasing ? To me backpack ruin pictures (especially the Italians colorful ones), yet at the same time they are contemporary items and should not systematically be ignored. In some ways, the backpack in the first plane could have been left in the frame to give a sense of a little dance break. Yet I would have done everything to leave the one shown in the background because it is to me the key picture breaker. Another way to take care of it would be to use a larger aperture and blur the background, yet Charles probably set an aperture of F8-F11 to allow a read on any single details. As for the general look of the picture, there is the right amount of contrast, though I would simply put some more exposure time to the girl’s body. This is not that easy to do in the lab I guess. Finally, let’s mention the wonderful shape of the flying dress. Charles allowed a lot of dynamism in this shot by selecting a low shutter speed, great choice.

Meaning / Mood / Feeling
The meaning is crystal clear, that is a couple enjoys a dance in a harbor. The mood is happy, it seems to be an event where people are enjoying themselves. It is clearly a contemporary shot, the backpack and clothing leave no doubt about it.

Opinion
The shot is dynamic and brings a sense of happiness. It is pleasing to look at and brought me smile, no doubt about that. It is a good document of life in our times. I am sure that 50 years from now, many people will look at it with a nostalgia look. “Where shoes and backpacks really this way back in 2010 grandfather ?” could very well heard in the future. Nevertheless, the guy looking towards the dancer in the background bothers me somehow. He breaks the union and at the same time his body posture doesn’t really introduce some sort of interaction with the couple. All in all, these kind of shots taken at events are always very difficult since so much is going on. It is complex to analyze every single detail and position them correctly. Using a large aperture is often the easy way yet it sometimes take key elements of a picture by blurring them. The only way to keep both the large depth of view and eliminate some of the unaesthetic elements would have to have come close and shoot upwards. (Sorry Charles, but I just can’t get my eyes out of that backpack 😉 )

To discover more about this harbour series as well as Charles photography, click here.