Today let’s look at two shots coming from the US, let’s stop first on Hollywood Boulevard before we proceed on to Chicago. 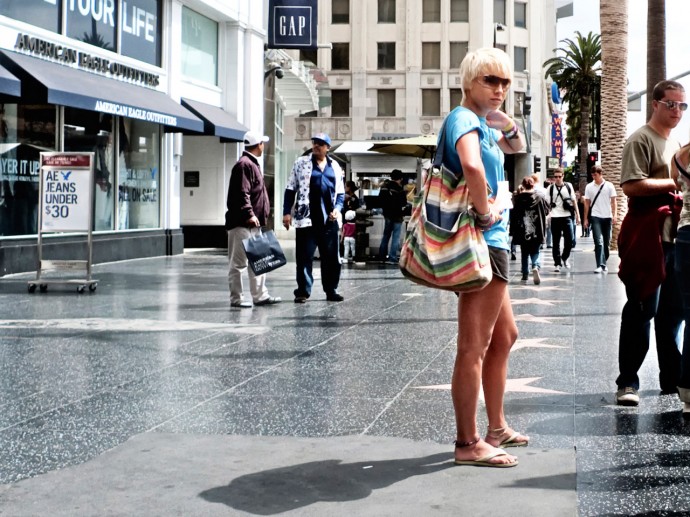 Composition
Sergey’s shot is a classic street scene composed following the rule of thirds. There is depth in the shot, which is always good, and the trapezoid shape of the street leads the eyes of the viewer towards the girl and the flow of the traffic. The line of stars also point to the end of the street which adds futher to the depth. Also notice how the girl’s shadow falls within the frame, well composed here again. I am a bit bothered by the fact that the action on the right of the frame is partially cut, I think the couple could have been part of the picture’s story. The point of view elected was pretty low (shot from the hip) but still Sergey managed to keep the horizon line straight, good job here as it is often very challenging when using this shooting technique (or was it adjusted in post-processing ?).

Aesthetics
There is a problem here that jumps straight to my eyes: burnt highlights. I don’t usually mind when the sky is burnt as it is often difficult to avoid it in high contrast scenes like this one. Yet, I feel the main subject has to be well exposed which is not the case in this shot. Indeed the girls’s hair, her shirt and arms have noticeable blown highlights, which instantly gives a digital look to the scene. I doubt Sergey would be able to recover all the burn highlights in post processing but I would tone down slightly the exposure, maybe half a stop. As for the colors, it is all about the girl and I like her blue shirt as well as her multi color bag. Tt makes it visually appealing and emphasizes clearly on who is the star of the picture.

Meaning/Mood/Feeling
This picture shows one of the dilemma you will face in street photography. Whenever you encounter a potentially  interesting subject (and that girl was a pretty good subject), you can either go for the street portrait shot, or include your “portrait” in a street shot. I would define a street portrait as a close-up where the subject is the main part of the field of view. Usually, some of the subject’s environment can be seen but the expression and look of the person portrayed are the key elements of the picture. In this case, Sergey opted to portray the girl as one element of a street scene. The question becomes then, how does the environment and the girl connect in this picture? Or in other words, why did Sergey frame the shot so widely ? The element critical to the scene were in my opinion the girl, the stars, the Palm trees and the boy on the right. I would therefore have framed more on the right to include the girl that looks like his companion. All other key components would have remained in the frame. Finally, see how the boy’s look is pointed towards the photographer … a second later it would probably have gone towards the girl. Imagine then the result : a boy peeks out at the girl while his girlfriend looks away … all of the sudden all the elements connect between them.

Opinion
Sergey’s shot has a sound composition and he did record an interesting pause from the girl. Yet the shot is a bit too digital looking due to burnt highlights and I don’t feel all elements connect between them as good as they could have. This illustrates the complexity of street photography. In a second you must compose, expose well and take special attention to all details, preferably before being spotted. This was a tough shot to make work and I think Sergey got it half right. The choice to frame wide was the correct one but the camera was pointed slight too leftwards. This illustrates somewhat why I am not a big fan of hip shots, framing will never be as precise as when you raise your camera to your eyes.

Untitled by Erin Girard from Chicago 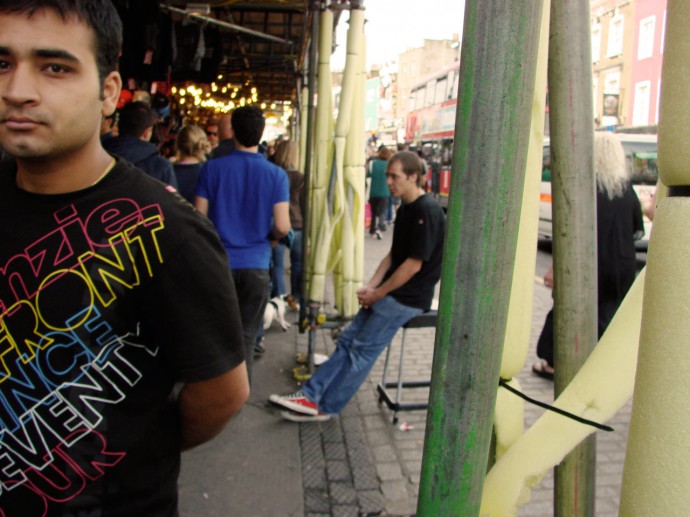 Composition
Erin included a subject in the first plane of his shot. This is the trademark of some great photographers such as Jason Elenaski or Eric Bouvet. Yet it is a very difficult way to compose since you a slight movement from your subject might throw him out of the frame. Also, that first plane purpose is usually to either have an interaction with the second plane or add aesthetically to the picture. In this instance, I think both the position and the composure of the boy in the first plane are interesting. Looking at the shot, I get the feeling that the shot was taken a bit approximatively, maybe on the fly or maybe from the hip. The horizon line is bent which can add dynamism to certain shots. In this case, it does not serve the purpose, but maybe it was just unplanned for.

Aesthetics
Again in this shot, I get too much the feel of digital. There seems to be very little dynamic range on this snapshot and exposure is off. To Erin’s discharge, it was a tough one due to the very high contrast between the left and right part of the image. Maybe a localized exposure adjustment could have deal with it and unify a bit more the two sides of the picture. The focus point was very close to the photographer therefore the picture is blurry right after the subject on the left. This results in a background where people’s expressions are blurry and does not allow an interpreation of the second plane subjects’ expressions. Except for the boy’s T-shirt, the color space is a bit dull, probably due to the mis-exposure.

Meaning / Mood / Feeling
I looked a long time at this picture but could not find a meaning to it, even less a feeling. The whole shot stands only on the boy in the first plane. His attitude and look are interesting, but what is doing, why is he looking this way ? And more important, how does he connect to his environment. A market merchant ? A man passing-by ? The rest of the frame does not bring any more clues, nor mood as no elements connect to the main subject, either in terms of action or aesthetically.

Opinion
Kudos to Erin to have tried an unconventional framing. The boy’s attitude and his position could have been the part of a great picture. Yet, the rest fails in many regards, be it technically, aesthetically and above all, in terms of message or feeling conveyed. I personally don’t use the first plane technique a lot, because it is extremely difficult to visualize and anticipate. I would advice Erin to experiment a bit more with it, this could be part of one’s style. Another way to take this kind of shots is to focus beyond the first plane. Indeed Erin could have focused on the boy sitting in the back which would have resulted in a blurred foreground. This effect works sometimes great and is used by many professionals. The shot I just posted today gives you an idea on how to use this effect.

You can discover more of Erin’s pictures by following this link.

And remember, this is just my opinion, the one that counts most is ultimately yours !