Today is the first post of a new column : Critique-a-shot. On a weekly basis, I’ll write a critique of one or several pictures, be them mine or more interestingly, the ones submitted by readers. (see “how to submit” in the section after the critique).

Indeed, every once in a while, we shoot a picture where one is not so sure whether it will be interpreted as initially intended. The goal of this column will be therefore to analyze the selected pictures methodically and come up elements that will help to build an answer. To do so, I will look in details at three components of a picture, that is composition, aesthetics, and meaning/mood/feeling. The elements outlined in these three sections will then be combined to come up with a final opinion on the shot.

So let’s start by this first shot that I took at the job site of a small Argentinian town. 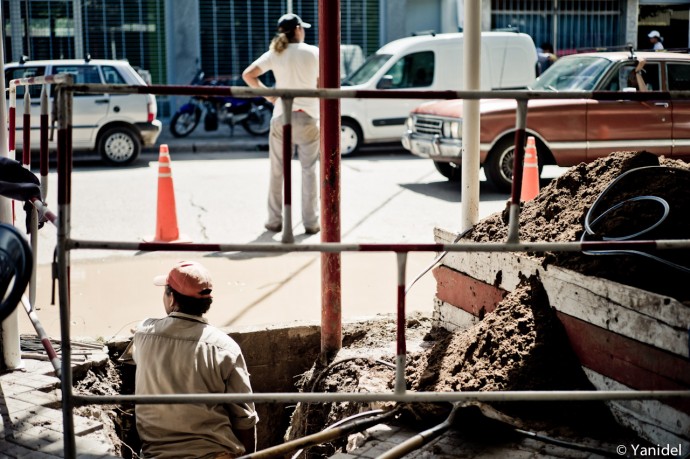 Composition
A classic example of a rule of thirds construction. The scaffolding breaks the field of view in equal parts. The worker  in the first plane acts as counterpoint to the brown car entering the picture. Both workers’ heads point to different directions, giving a sense of activity going on in the street. The orange cones help the viewers to anchor their attention to where the main elements are located. Other constituents can be seen in details such as shovels and hoses to give hints on the tasks being performed. The third plane is made of parked cars and bikes that probably hint to a busy street. The bit of the chair that sticks out on the left bothers me somewhat though, a slight crop could maybe take care of the problem.

Aesthetics
This is the strong point of the picture in my opinion. The color gamut encompasses tints that work well together such as browns, orange, black and white. The orange cap of the worker is similar to the construction cones. The lines of the car are the reverse pattern of the wood planks that hold the dirt mount. The choice to select a large aperture (F2.0) resulted in a thin depth of field, creating a blur just after the first plane. This choice can be questioned. As a matter of fact,  the three planes are important to the reading of this picture, so a smaller aperture would have brought all elements to the same detail level. The author probably wanted to emphasize the action on the first plane and use the background to build a mood around it.

Meaning / mood / feeling.
Given the shadows, the sun is probably at his highest point of the day. The bright road conveys the feeling of a very hot temperature, which is emphasized by the blur of the thin depth of field. The water spillage might mean that a water pipe cracked, creating a nice wink to the high temperatures. The car helps locating somewhat the shot, definitely not in Europe, especially given the light security measures around the job site. This could also be a hint on the work conditions of the two employees, though this interpretation has definitely no strong ground to stand on (in the literal sense…). The main negative critique of this shot comes to the meaning of the picture. It cannot be read clearly about what the workers are doing or thinking. There is little interaction between the two. Perhaps, there is simply no wanted connection and both workers hover in their own world. All in all, the message conveyed by the author cannot be clearly defined, which might or might not bother the viewer.

Opinion
I believe the shot works in terms of composition and aesthetics.  Yet something seems missing, I would have liked more information,  maybe a small gesture from the first plane worker, or a better connection with his colleague. I believe it is a above all a moody shot, it transmits an atmosphere more than a meaning through composition, colors and depth of field. It intends to convey the feeling of a hot summer day, at the time when activity starts to slow down in a little town. Yet little can be said about the underlying message of the photographer, if any.

Please feel free to add any input to this critique in the comments section. Obviously this first critique is a bit biased since I took the shot and had insider information 😉 Feel free to be positive or negative, it will be fine as long as it is written in a constructive manner.

Interested to have you shot go through this critique exercise ? Here are the instructions on how to submit:

– send a picture of a minimum width of 1280 pixels and no more than 1 MB size to yanidel@fastmail.fm . Obviously, you’ll retain all copyright of your pictures, I will only use it once to illustrate the corresponding critique.

– add your name, location and any link to the portfolio/website that you would like showcased.

– if possible, add info on the camera / lens / exif. Please do not mention any information on the background and location of shot, let’s see if the shot speaks by itself first. You might nevertheless add it to the comments section after the critique is published.

– all pictures must be street photographs, involving strangers and unstaged. No portraits, flowers or cats shots will be reviewed. To make it interesting, send pictures where you are not sure whether the shot works or not in its initial intend. Submitting your best memorabilia is not the goal of this excercise.

– and above all, be ready for a sincere output, be it positive or not. I won’t be harsh but if the shot fails in some of its components, I will tell you so. If I feel it is great, I will also tell you so 😉 Readers are also encouraged to give their own opinion in the comments section, again please do it in a constructive manner.

Note that I am not a professional art critique. I will just give you one opinion which in no way will determine whether  a given shot is a good one or not. Taste is highly subjective, and so is the interpretation of street photography shots. The end goal of this column is to provide hindsight on how one might read a picture and a general sharing and learning experience to all readers interested in street photography.